What next for our big health insurers?

What next for our big health insurers?

Investors in NIB Holdings (ASX:NHF) and Medibank Private (ASX:MPL) would have enjoyed the past six months, with the share price of both companies rising by over 20 per cent. And there may be more good news to come.

The private health insurance industry is one we follow closely given the underlying thematic around the impacts of the aging population, growing pressures on the Government’s ability to fund universal healthcare, and the sector’s fundamental importance to the broader healthcare industry.

NIB Holdings’ share price fell 6.3 per cent after reporting its earnings for the year to June 2019. The market’s main concern was the potential signs of an acceleration in claims inflation after a sustained period of low growth that has provided underwriting margin support.

The main chart from the result presentation that concerned the market is shown below. 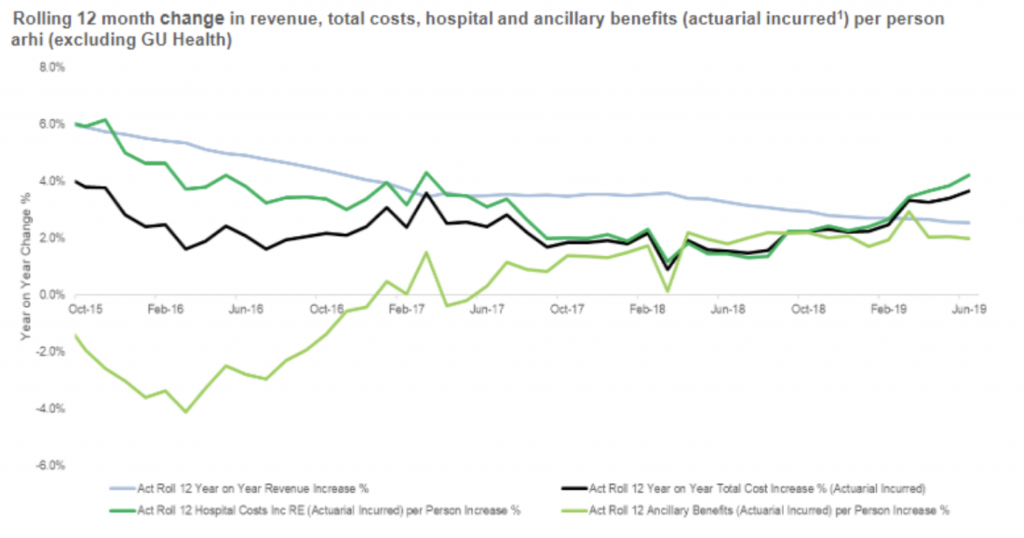 The chart indicates that after a sustained period in which claims inflation was lower than revenue growth, this reversed from February 2019. Revenue growth has continued to slow since February as the lower premium increase put through from 1 April flows through to revenue, while claims growth has continued to accelerate on the back of higher growth in hospitals claims costs.

Underlying earnings from the Australian health insurance business also weakened in the second half of the financial year once the impact of movements in claims provisions is removed from the numbers. However, a closer analysis of the reduction shows that the reduction in underwriting profits was the result of increased management expenses rather than higher claims costs driving down gross margins relative to the first half. 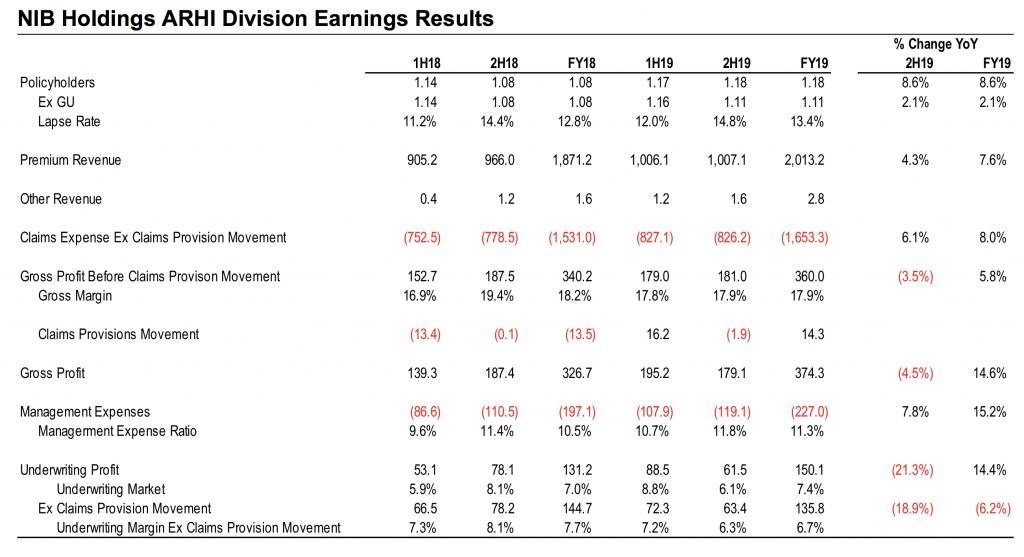 A number of analysts have warned of an impending private health insurer margin collapse as claims inflation reverts to historic trends due to the ageing population. At the same time, affordability issues accelerate claims cost increases as low-claiming younger people drop coverage, shifting the average policyholder in the insurance pool toward high-claiming older people.

The company has repeatedly stated that its long-term target range for underwriting margins is 5 per cent to 6 per cent. Margins have been tracking ahead of this level for some time due to a sustained period of slower than expected growth in the volume of hospital procedures per policy. The contraction in second half margins is partially a deliberate move by the company to provide more value to policyholders and bring margins down toward the long-term target.

Medibank Private’s underwriting profit performance was better than that of NIB, with underwriting profit before claims provision movements rising 4.6 per cent relative to the same period last year. This is primarily due to a lower management expense growth than NIB.

Medibank commented that while there are a number of factors that are either boosting or reducing claims growth at present, the environment remains relatively benign. Looking forward, the next round of prosthetics price reforms flows through from February next year, and is expected to reduce prosthetics costs by around A$100 million a year for the overall industry. Additionally, mental health claims growth is expected to settle down a bit after the removal of the claims waiting period for those upgrading cover drove a surge in claims growth in the second half of FY2019. This is balanced against the need to constrain premium increases going forward.

Both of the listed private health insurers benefit from scale advantage, but Medibank has the additional benefit of being ex-investment in its core systems and platforms, while being in a stronger capital position than NIB ahead of the release of an expected increase to capital requirements by APRA in the near term. This has the company well placed to strengthen its position in the market should there be a shake-up in the competitive landscape of what remains a fairly fragmented industry with a long tail of small operators.

The Montgomery Funds owns shares in Medibank Private. This post was prepared 29 August with the information we have today, and our view may change. It does not constitute formal advice or professional investment advice. If you wish to trade Medibank Private you should seek financial advice.

You are reading an article about: Companies, Health Care, Stocks We Like