Australia’s four major banks have now reported their interim results. Common to all of them were three key themes, which are presenting both challenges and opportunities.

Once one-off remediation and profits on sale of businesses are stripped out, revenue growth for Australia New Zealand Bankng Group (ASX:ANZ), National Australia Bank (ASX:NAB) and Westpac Banking Corp (ASX:WBC) was almost non-existent and down for Commonwealth Bank of Australia (ASX:CBA). Slowing growth in the average loan book was offset by continued net interest margin contraction. 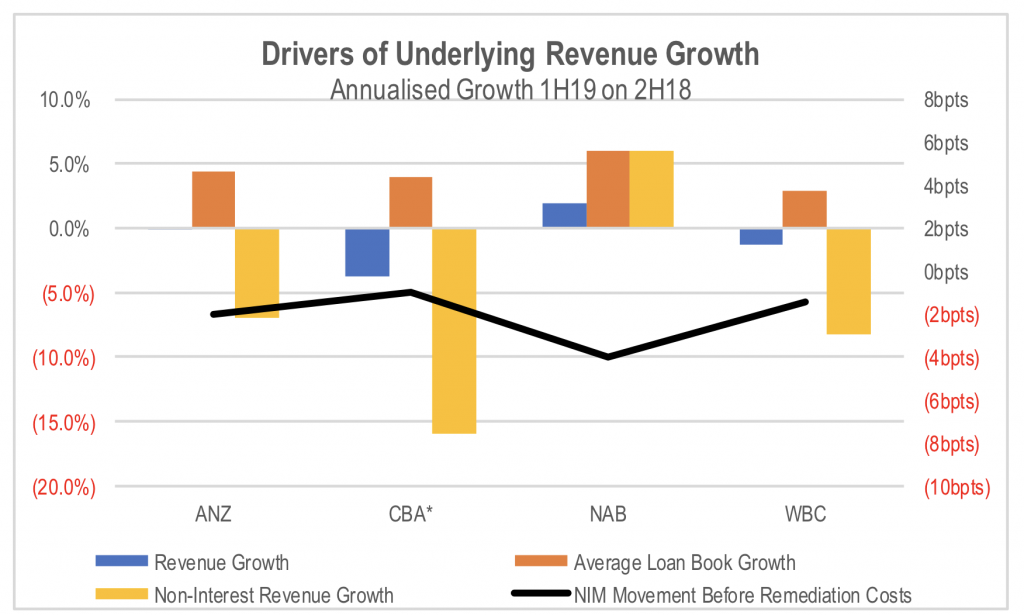 Net interest margin compression, combined with fee reductions in wealth (WBC) and banking were combined with poor loss outcomes in general insurance for ANZ, CBA and WBC. This more than offset growth, albeit slowing growth, in loans books.

What was interesting was the slowing of not only mortgage book growth, but also business lending outside of lending to large institutional clients. 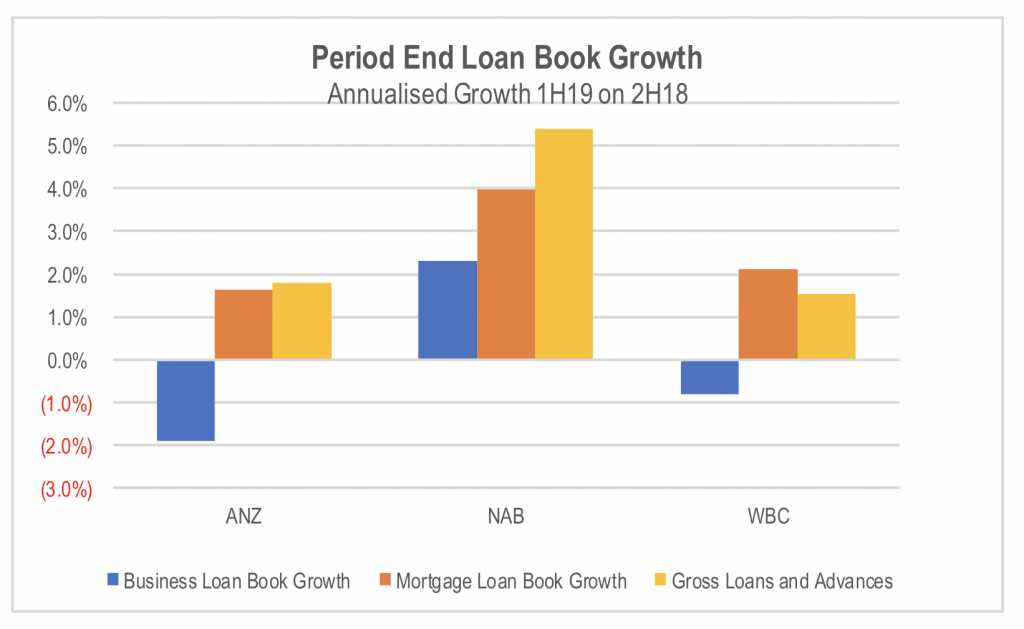 Net interest margins fell despite the out of cycle standard variable mortgage increases put through by three of the four majors early in the period. More importantly, the outlook for net interest margins wasn’t as positive as expected with the banks flagging that the benefit from the recent contraction in the Bank Bill Swap Rate (BBSW) to Overnight Index Swap (OIS) spread will be offset by ongoing pressure on front book mortgage rates as banks focus on gaining market share to offset the impact of slowing system growth.

Non-interest income remains under pressure, with fee revenue generally falling, while trading performance was mixed across the banks. WBC and CBA faced a further headwind in an elevated claims cost period due to more storm costs than normal. This should be expected to mean revert in future periods.

Cost reductions are becoming the last option for earnings growth

Three of the four major banks managed to reduce their absolute amount of operating costs before remediation, divestments, and other one-off items in the period relative to the previous reporting period. CBA was the exception, increasing its underlying operating costs by 2 per cent on an annualised basis. 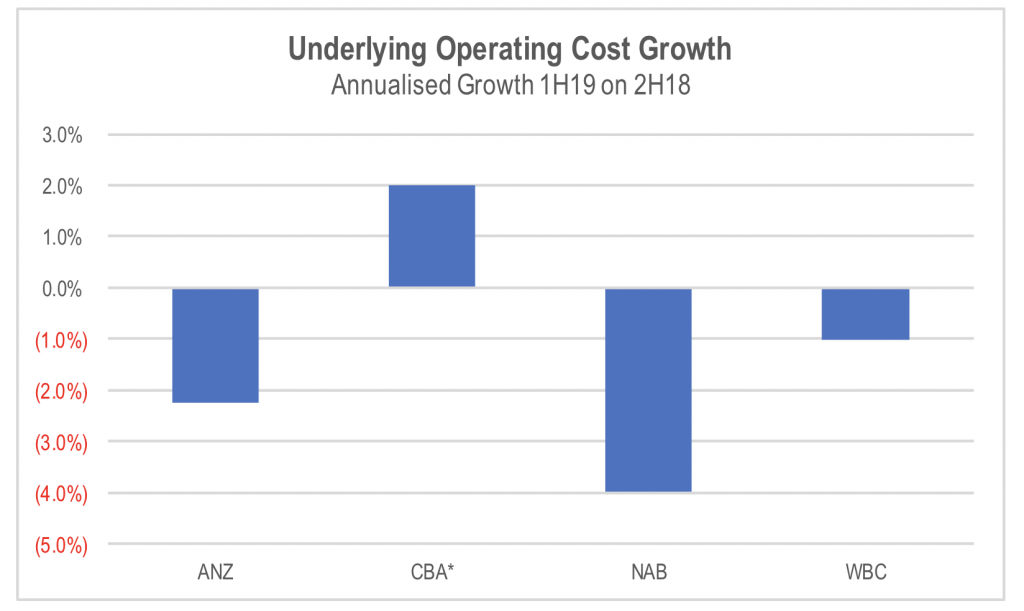 Similarly, two of the banks managed to reduce their underlying cost to income ratio despite the weak revenue growth with the exceptions being CBA and WBC. 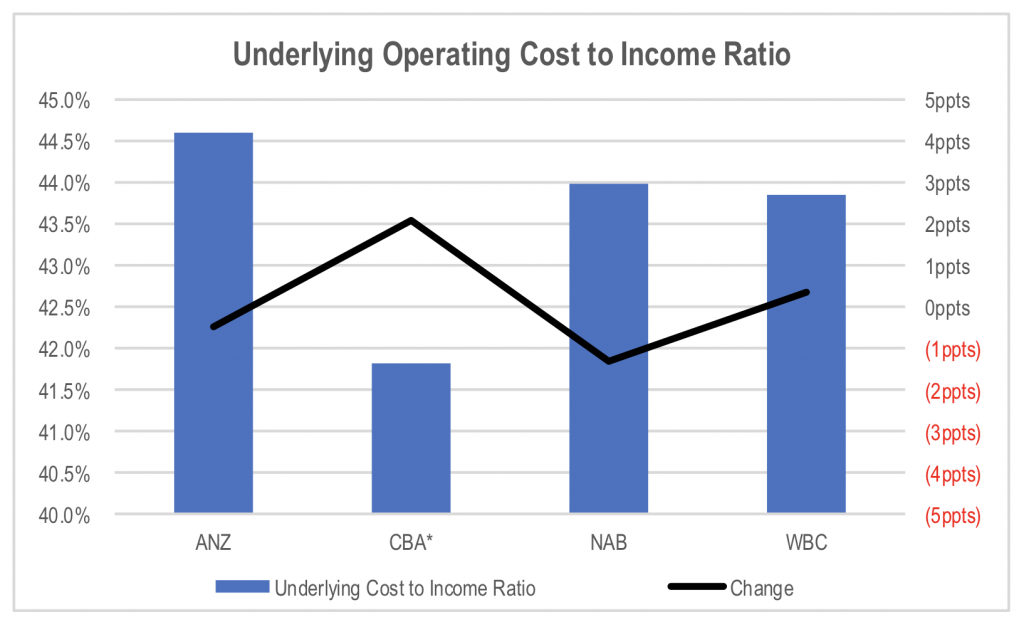 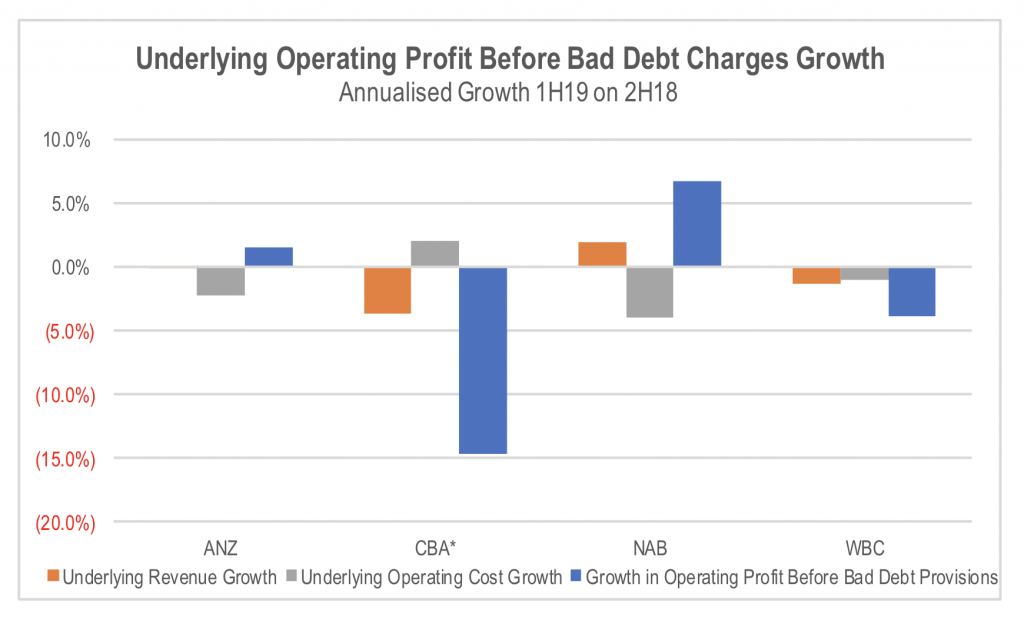 This highlights how hard it will be for the banks to generate material profit growth purely through operating cost reductions. Revenue growth will need to re-emerge, but it is difficult to see where this will come from given the high level of debt in the household sector, which will limit loan book growth, the banks that are more exposed to mortgages, combined with the competitive pressure on front book rates.

While net bad debt provisions had a continued benign impact on earnings growth, the trends below the surface continue to deteriorate.

The increase in charges relative to underlying operating profits were small, and for WBC, the charge actually reduced relative to 2H18. 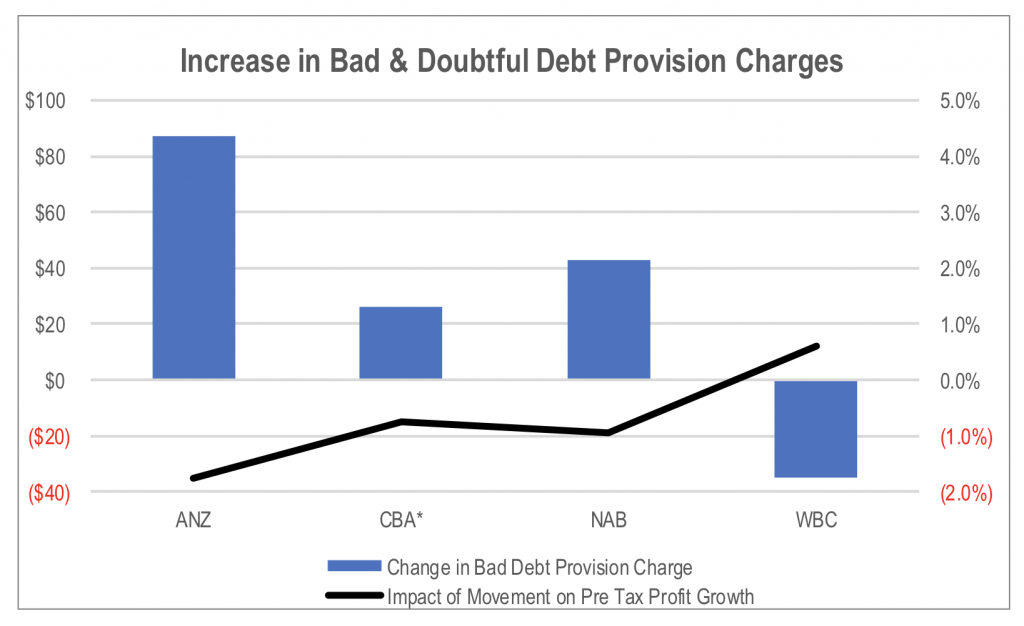 While the increase in charges was fairly benign for earnings growth, 90+ delinquencies in the Australian mortgage books not only continued to rise, but they appear to have jumped more significantly in the latest period. 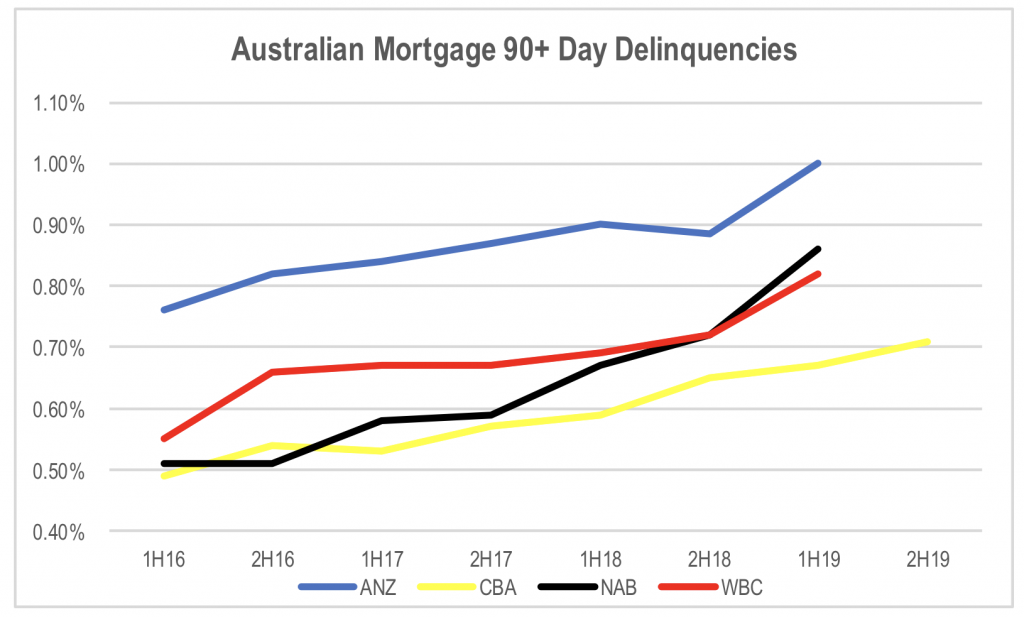 A large component of the increase continues to be the WA property markets, but the increase in NSW during the latest period was noticeable as well. NSW and the ACT have had much lower levels of delinquencies than the other states. But NSW delinquencies have increased in the last 6 months such that they are now inline or slightly above VIC.

Delinquencies do not necessarily turn into impaired loans, but they do act as an early indicator of potential future problems and building stress in the system.

Overall the results showed the headwinds that face the banks at present, and the challenges to their ability to generate earnings growth in the medium term.

The Montgomery Funds own shares in Westpac and National Australia Bank.  This article was prepared 15 May with the information we have today, and our view may change. It does not constitute formal advice or professional investment advice. If you wish to trade these companies you should seek financial advice.

With the banks recently reporting their results, Stuart takes a closer look at three key themes which were present during the results. Click To Tweet
MORE BY StuartINVEST WITH MONTGOMERY