The retailers that should weather the coming economic storm

The retailers that should weather the coming economic storm

Conditions are about to get tougher for retailers as they face a perfect storm of falling incomes, galloping inflation, and rising interest rates.  These impacts will crimp the discretionary spending power of many people. The one exception could be the under 25-year-old Gen Z demographic, who have fewer non-discretionary costs than other age groups. The retailers who sell to them could fare better than most.

Over the last six months, discretionary retail stocks have been among the worst performers on the ASX, with the S&P/ASX 300 Retailers Accumulation Index underperforming the broader market index by 13 per cent over that period. Admittedly, this recent under performance merely unwinds the 20 per cent out performance of this index in the preceding 18 month period which coincided with the recovery in the market from the pandemic lows.

Over the last six months, only 1 of the 17 stocks in this index has managed to perform better than the broader market, JB HiFi, while four generated losses of over 50 per cent. Notably these stocks, Red Bubble, Kogan, City Chic and Temple & Webster, are all online retailers, and performed very strongly over the first year of the pandemic as they were perceived to be COVID winners. 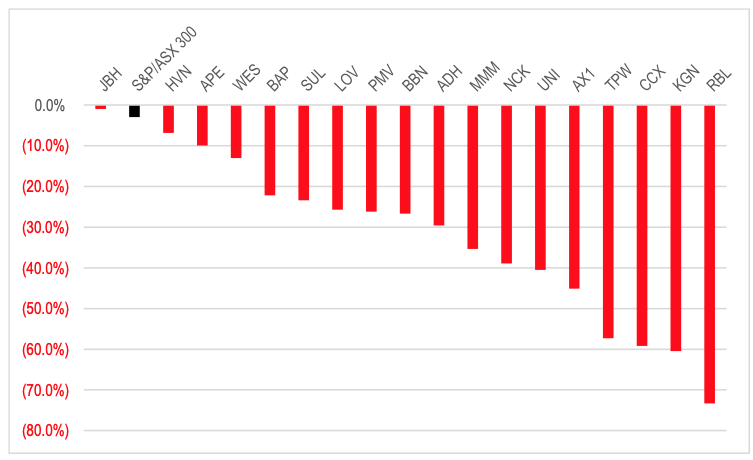 The market is concerned that the combination of falling incomes – as households face rising inflation on a broad basis eating into real spending power, and rising interest rates – will reduce discretionary spending power. However, it is not as simple as this.

While these factors are likely to lead to pressure on overall discretionary consumption, these factors do not affect all segments of the economy equally.

CBA’s economic team has released data for household income and spending growth for the March quarter of 2022. This data is broken down by age demographic.

In looking at the potential impact of spending from cycling the impact of large stimulus payments that were received by households in the prior year, CBA’s data suggests that the percentage of Millennials receiving some sort of government payment has fallen the most relative to the December quarter of 2021 followed by Generation X. Gen Z and Baby Boomers have experienced less of a reduction.

Offsetting the reduction in government benefits is an increase in the percentage of people receiving a salary. This is likely as a result of people returning to work post the pandemic and the current strong labour market. 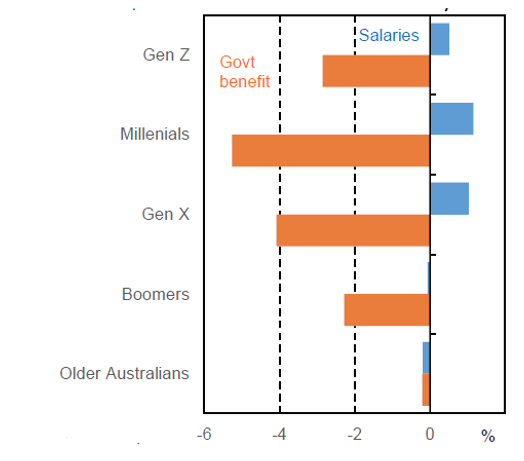 This then feeds into the impact on each demographic’s growth in overall income over the last 12 months. This shows that Gen Z has benefited the most from the current strong employment market with increased employment and strong wage growth while the percentage receiving government benefits remains higher than other demographics and above pre-pandemic levels. 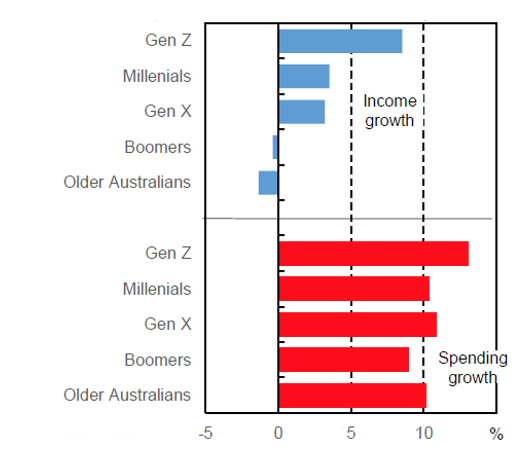 Not surprisingly, it is also Gen Z that has shown the strongest spending growth in the March quarter. For the other generations, spending growth has exceeded income growth, implying that their savings rates have declined to fund that growth in spending.

But savings are still well above 2019 levels for all generations and still rising. This will provide a buffer against cost increases and slowing growth in the medium term as inflation and higher interest rates bite. Gen Z has the biggest savings buffer. 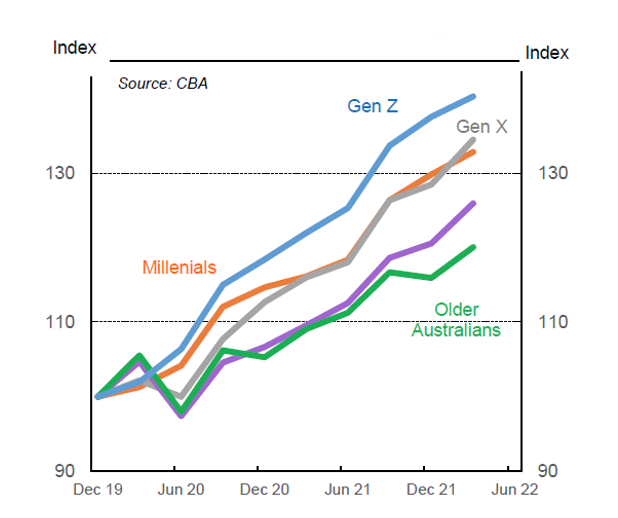 Not surprisingly, overall household wealth is considerably higher than at the end of 2019, primarily as a result of rocketing residential property prices on the back of emergency monetary policy settings. The wealth effect of housing prices is an important driver of discretionary spending in Australia and has benefited retailers over the last two years. 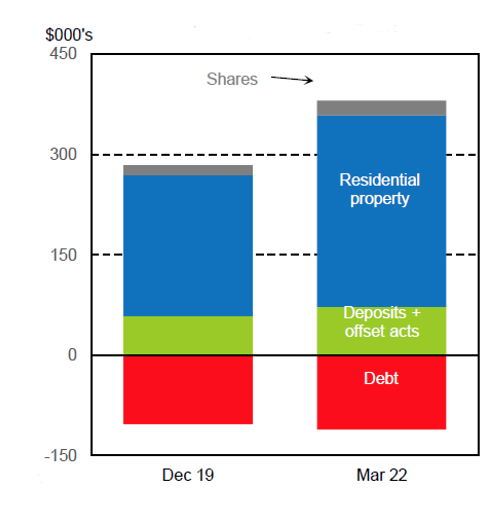 Of course, what interest rates can give, they can also take away. With variable mortgage rates likely to increase 1-2 percentage points over the next year, residential property prices are expected to fall, reversing some of this wealth effect.

There is no doubt that conditions are set to tighten for retailers over the coming year. However, reversing wealth effects from falling property prices and falling discretionary income levels will primarily impact those generations that own most of the housing stock, namely the Baby Boomers, Gen X and to a lesser extent the Millennials. Baby Boomers are more likely to be impacted by falls in house prices while Millennials will be more impacted by the need to allocate more of their income toward mortgage repayments.

For those that rent rather than own their home, rents are also likely to rise, as property owners try to pass on rising mortgage, utility and maintenance costs to tenants.

Those with families will be more impacted by rising prices of non-discretionary goods and services like food and utilities. This impact will be concentrated on Millennials and Gen X.

While not immune, the younger Gen Z demographic is likely to fare better than other generations given it faces fewer non-discretionary costs, and is not as exposed to property and wealth effects. At the same time, it is experiencing the strongest income growth and has had the most significant increase in its savings over the last two years.

Hence, we prefer retailers that cater to this younger demographic in the discretionary segment such as Universal Store and Accent Group.

The Montgomery Funds owns shares in City Chic, Universal Store and Accent Group. This article was prepared 18 May 2022 with the information we have today, and our view may change. It does not constitute formal advice or professional investment advice. If you wish to trade Goodman Group you should seek financial advice.