During their recent earnings report, Spotify announced acquisitions of podcast studio Gimlet Media and Anchor, a service that streamlines podcast making, advertising and distribution. The commitment indicates their plan to expand their offering to become more than simply a music streaming platform.

The move is unprecedented, as CEO Daniel Ek emphasised, “what I didn’t know when we launched to consumers in 2008 was that audio – not just music – would be the future of Spotify.” Nonetheless, Spotify has started down the path of becoming an aggregator of the rapidly growing and so far under-monetised network of podcasts.

Aggregation Theory, coined by Stratechery’s Ben Thompson, describes the twenty-first century commoditisation of distribution through the internet. The Theory was aptly illustrated by Tom Goodwin in a 2015 Techcrunch article, before the concept had a name:

Businesses successfully capitalising on this model have become the most influential technology companies of the modern era. They incur zero marginal distribution costs and can operate at any scale. The larger they grow, the more necessary they become to the business-consumer network they operate in, in turn driving further growth – a cyclical aggregation model.

Disruption in the music industry

The music industry has been dominated by record labels since the early twentieth century development of sound recording and printed music. These labels sign artists and distribute their music in exchange for a sales commission. This model was disrupted by the rise of the internet, whereby illegal pirated copies of music could be downloaded for free by consumers. Worldwide revenues for CDs, vinyl, cassettes and digital downloads fell from US$36.9 billion in 2000 to US$15.9 billion in 2010, according to IFPI. 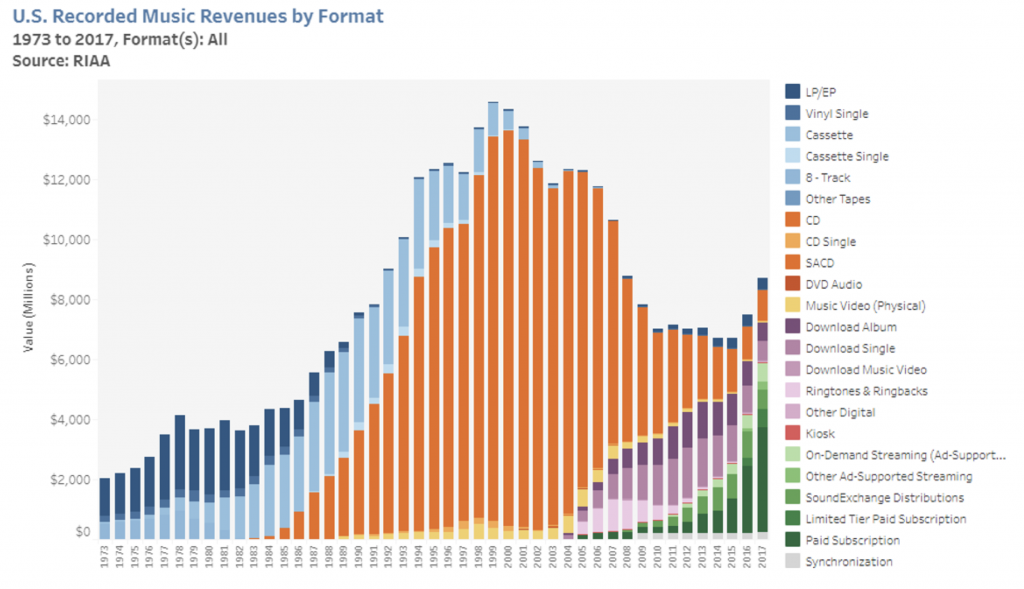 Spotify, along with Apple Music, introduced a new centralised model that instead of competing against the internet, embraced it. Consumers pay an affordable subscription amount for the convenience of access to all the music they want in one centralised place. After almost ending the music business, the internet is now to thank for its revitalisation. Deutsche Bank is predicting continued expansion of streaming revenue to US$21 billion by 2023, triple its level in 2017. This comes at a cost to other sources such as CDs and MP3 downloads, which they expect to more than halve to US$4.4 billion.

Spotify’s business model sounds much like Aggregation Theory – artists need Spotify to access listeners and listeners need Spotify to access artists. However, record labels still play a central role in artists’ distribution network, taking a percentage of all streaming revenue. Hence, unless Spotify can begin bypassing record labels to sign artists individually, they will pay marginal costs on every piece of incremental streaming revenue to dominant labels such as Vivendi’s Universal Music Group.

The same does not apply to podcasts. Podcasts are owned by their creators, who are licensed to distribute them to listeners through whichever channels are most effective. The podcast industry is only missing a central platform that facilitates the connection of podcasters to all their prospective listeners. Enter Spotify.

Spotify’s recent acquisitions signal their intention to become the podcast aggregator. With over 200 million listeners and a significant podcast presence already, Spotify is uniquely positioned to successfully monetise this strategy. “In just shy of two years, we have become the second-biggest podcasting platform,” explains Spotify CEO Daniel Ek. “Our podcast users spend almost twice the time on the platform, and spend even more time listening to music.”

Gimlet provides Spotify with a small starting supply of successful, exclusive podcasts. Ideally the brand becomes the banner over Spotify’s exclusive podcast listing as it expands toward the size of Apple’s and beyond. More importantly though, Anchor enables podcast creation and distribution, and as such becomes a long-term generator of supply for Spotify.

The reason Spotify is the ideal podcast aggregator is the potential in their advertising model. Spotify generated €542 million (US$616 million) in advertising revenue in 2018. Podcasts are monetised through advertising revenue, yet only drove around US$317 million in the US last year. Edison Research analysis says that 73 million Americans listen to podcasts monthly, 48 million weekly, at an average of 7 podcasts per week. 180 million Americans stream audio monthly. Compared to the US$7 billion in 2018 music streaming revenue, there appears a significant podcast monetisation story waiting to play out.

For Spotify, podcasts fit perfectly into their already-developed infrastructure and, without record labels, are far more profitable than music. Podcast app Pocket Casts CEO Owen Grover commented, “strategically, if they can get their users to listen to podcasts in place of music, it improves their margins.” Moreover, in the same way that Netflix creates original content exclusively for their platform, with Anchor Spotify can utilise popular podcasters to generate exclusive podcasts that form the basis of their podcast domain.

With all the necessary pieces in place, Spotify’s challenge to become a true Aggregator is to use their growing stock of data to control the value chain of suppliers, listeners and advertisers onboarding to their platform. Ultimately, podcasters need to be coming to Spotify because that is the best way to monetise.

Excitingly for Spotify and podcasters alike, CEO Daniel Ek predicts that over time about 20 per cent of all Spotify listening will involve something other than music. “If we are successful, we will begin competing more broadly for time against all forms of entertainment and informational services, and not just music streaming services.”