After years of standing by as our manufacturing industries were sent offshore, the Federal Government has set up a task force to restore local manufacturing. “Australia drank the free-trade juice and decided that off-shoring was OK. Well, that era is gone,” Andrew Liveris, who is on the task force, told the AFR.  It’s a great idea, but there are some mighty challenges ahead.

Liveris will be working with Ned Power’s advisory commission. He is the former CEO of the US Chemical giant Dow Chemical, and sees the current crisis as an opportunity to kick-start a resurgence in local manufacturing.

To start with, let’s have a look at the recent history of manufacturing in Australia. It should not come as a surprise that manufacturing as a per cent of total GDP is lower for Australia than for other comparable countries given our heavy focus on resources exports but it was a bit of a surprise to me to see the extent that we are lagging other comparable countries and also the extent the percentage has declined over the last 30 years.

If we look at this chart below which contains data from the World Bank, we can see two things that stand out: 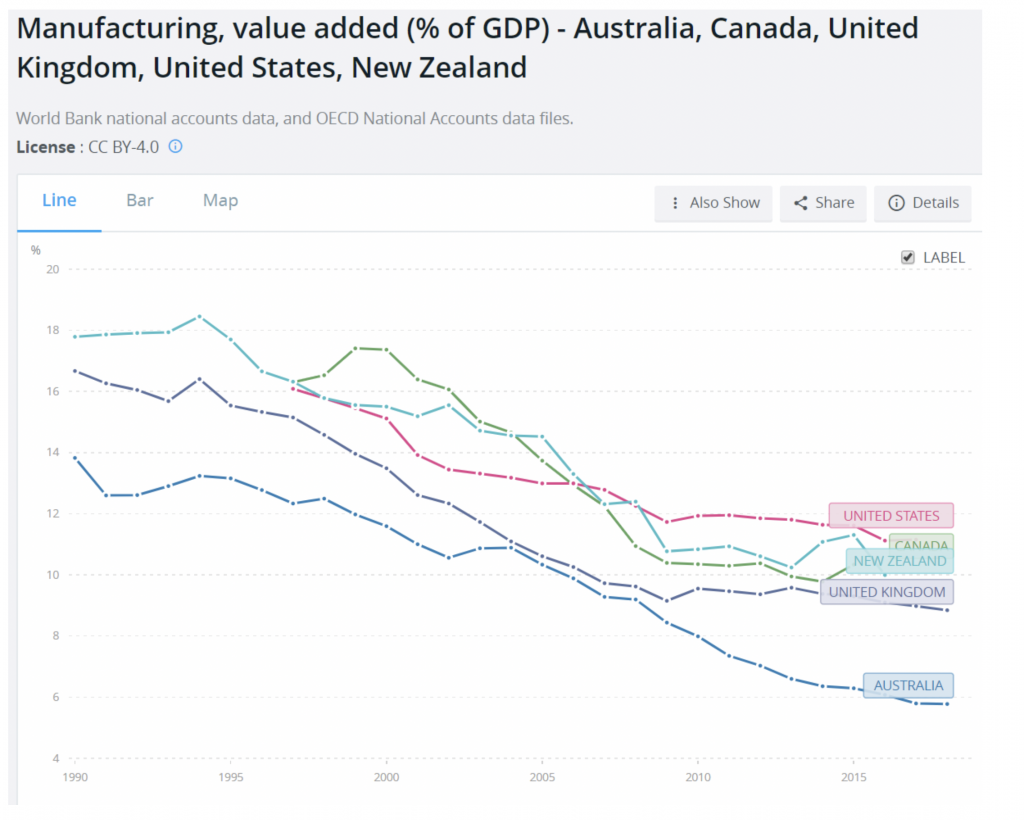 The current crisis has in many ways highlighted the issues with having little local manufacturing capacity. There are many, but to me the most important are:

Shifting macroeconomic settings to achieve an increase in local manufacturing will be a hard nut to crack as there are many vested interests that will potentially suffer from such changes. Six of the largest challenges that Andrew and the rest of the advisory commission will have to tackle are:

1. The Australian tax system needs to be recalibrated to capture more of any profits above a certain level generated by extraction of natural resources and then channeled into giving tax incentives for local manufacturing operations. This will probably have to be through some super-profit tax which has in the past proved very unpopular with the strong interests representing the resource industries.

2. The Australian university sector will have to refocus away from the mass education of foreign students which is debasing the overall level of education (Australia has by a factor of 2x the highest portion of foreign students in the world) to being focused on applied science performed in collaboration with industry. This most likely means that the government will have to start funding universities again with money targeted for specific purposes. This will mean more public oversight over these institutions which is something that they will likely resist strongly.

3. A new employer-employee labour framework. Australian labour productivity has not improved for around 10 years and for manufacturing to reemerge I suspect that the current EBA system needs to be focused much more on linking productivity to pay which will be a tough thing to get unions to come to grips with.

4. Tax changes that encourage investments into productive assets instead of into non-productive assets like residential real estate to lower house prices and rents to free up capital for a rebuilding of manufacturing companies. This will be strongly resisted by the real estate industry and domestic property investors.

5. Connected to the previous point is a framework that incentivises banks to lend to small businesses instead of to real estate. Australia’s banks are significantly under skilled in SME lending compared to the rest of the world and will need to rebuild this skill set urgently.

6. Lower energy prices by freeing up gas to be used domestically on the east coast instead of being exported to such an extent that Australian domestic gas prices are much higher than the price for the same gas received from being exported to Asia. This will be fiercely resisted by the energy companies.

As you can see from this list, there are quite a few pretty powerful interest groups that to my mind will need to come to grips with a new reality if the advisory commission will have any long-lasting impact.