One reason why the Fed can’t raise rates

One reason why the Fed can’t raise rates

A lot is being written about the low interest rate environment in which we find ourselves. And rightly so: we would rank this as the number one most powerful force affecting asset prices today.

As for the reasons behind the interest rate dynamics we are seeing, there are many – including those related to demographics, technology and globalization. But there is another really simply reason why interest rates can’t increase on a sustained basis: indebtedness.

Take the United States, for example. At around 100 per cent government debt to GDP, this means that for every one per cent increase in interest rates, this equates over time to increased interest expense that needs to be funded by the annual budget – to the tune of one per cent of GDP. Said another way, this is akin to one per cent of negative fiscal stimulus.

The chart below was recently published by the Congressional Budget Office. It shows the annual budget of the US federal government, expressed as a percentage of GDP. The pink bars show the primary surplus/(deficit) which is the budget balance before the effect of interest. The green bars then show the net interest component – which, despite the low interest rate environment, is becoming more negative. Why? Because of the increased government borrowings required to fund the recent Trump tax cuts. 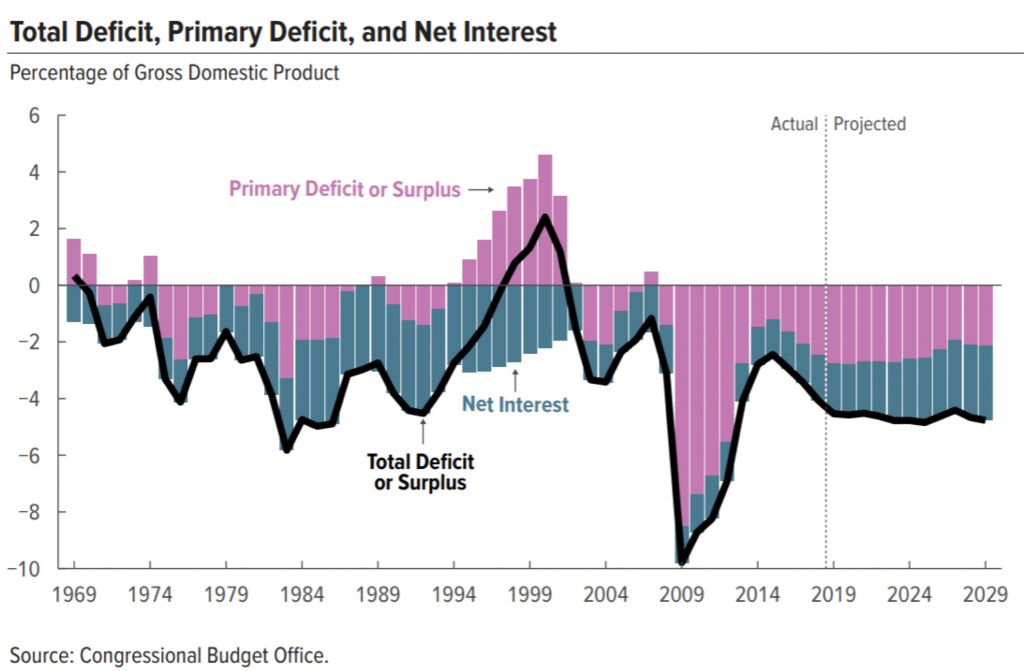 Should interest rates rise, the green bars would become significantly more negative – and the government may be forced to offset these with more positive pink bars. How do you make the pink bars positive? You raise taxes or cut government spending – both of which would damage growth and therefore push interest rates back down. Through this lens, the more that governments borrow, the more certain we can be that interest rates won’t rise.