One basic lesson in investing

One basic lesson in investing

In this week’s video insight Roger discusses why right now is a prime time for a basic lesson on investing. With fear at extreme, now is the time that bargains are found so what can be learnt from one of Warren Buffett’s quotes? And has inflation peaked? Find out why I think we will see disinflation.

Roger Montgomery: Welcome to this week’s video insight. Well, I think now is a prime time for a basic lesson on investing. Fear is extreme, there’s fear about inflation, stagflation, recession, a war, lockdowns in China. Interest rate rises. You can point in any direction and find reasons to be fearful, but that’s precisely the time that bargains are found.

Warren Buffett famously said, “Your goal as an investor is to purchase at a rational price, a part share of an easy to understand business whose earnings you are virtually certain will be materially higher 5, 10 or 20 years from now.” 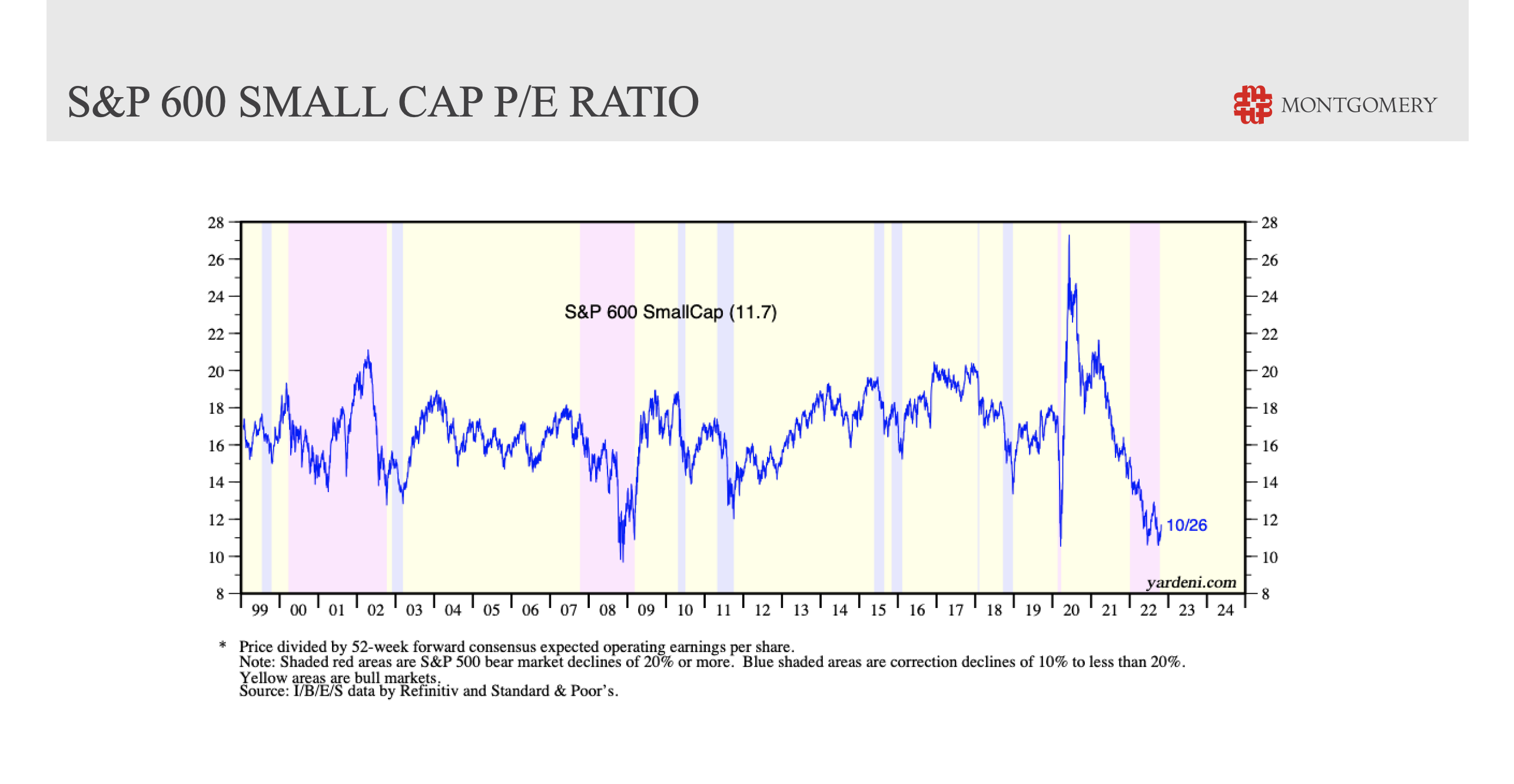 What you can see in this particular chart is that price-to-earnings (P/E) ratios for small cap stocks in the U.S today, and it’s probably reflected in Australian small caps as well, are as low as they’ve been at any point in the last quarter of a century. In fact, they’re only marginally lower during the global financial crisis and they’re lower now than they were during the COVID selloff.

So P/Es, which are a reflection of sentiment, are telling us that sentiment is really glum. Now, many investors are worried that because P/Es have fallen, that doesn’t mean share prices can’t fall further. And that’s true. Share prices could fall further, particularly if earnings decline. But if you look back at the chart again, you can see that during and before the GFC, P/Es collapsed then P/Es rose. Did they rise because the market bounced aggressively? Well, there was a bounce in the market, but what also happened is that share prices remained stable as earnings declined during the recession. And so the index, which is an aggregate of all those stocks, the P/E for the index, started to go up. I suspect we’re going to see a similar pattern again this time, and there’s some other reasons to be encouraged or optimistic. Number one, we are at a cyclical low in terms of bank balance sheets.

Going back over 50 years, we know that banks expand and contract their balance sheets, and at the moment, they’ve been contracting them certainly for the majority of this calendar year. But it could be that if a recession does appear, central banks will start to expand their balance sheets again. That means quantitative easing might start all over again. That would obviously be a flag that we’re off to the races again. Another reason to be encouraged is that when interest rates, bond interest rates particularly, are rising, value stocks tend to do better than growth stocks, but when interest rates start to fall and when bond rates peak, and that could happen if we get a recession next year, then it could very well be the case that we see growth stocks take off relative to value stocks. I also believe that inflation has peaked.

Now, don’t get me wrong here, I’m not saying that we’re going to see lower prices, but I think we’ll see disinflation and disinflation is consecutively lower rates of inflation. So if it was 9 per cent this year, it might be 8 per cent or 7.5 per cent next year and a lower number again the year after. And the thing to remember that historically since the 1970s, disinflation has been a very good time to buy the sorts of businesses that Buffett was alluding to, those businesses with materially higher earnings in five, 10 or 20 years from now. That’s all we have time for today. I look forward to talking to you again very soon.

You are reading an article about: Video Insights