HOW MUCH PERSONAL CREDIT IS OUT THERE?

HOW MUCH PERSONAL CREDIT IS OUT THERE?

Recent data shows a continuing decline in new and outstanding personal credit. This is a concern for our retailers, as it means Australians are taking on less debt for spending on discretionary items.

Now, with housing credit being tight on the back of the APRA’s tightening and the Royal Commission’s findings of lax lending standards on behalf of lenders, we are likely to see a negative wealth effect as house prices fall.

In this environment, I thought it would be interesting to look at the amount of credit that is outstanding outside of housing related loans. This credit includes consumer financing that is not secured on a residential property (either an owner occupier or an investment property) be it credit card debt, car loans or appliance financings etc. We can see the year-over-year (YoY) change in this kind of credit in the chart below. 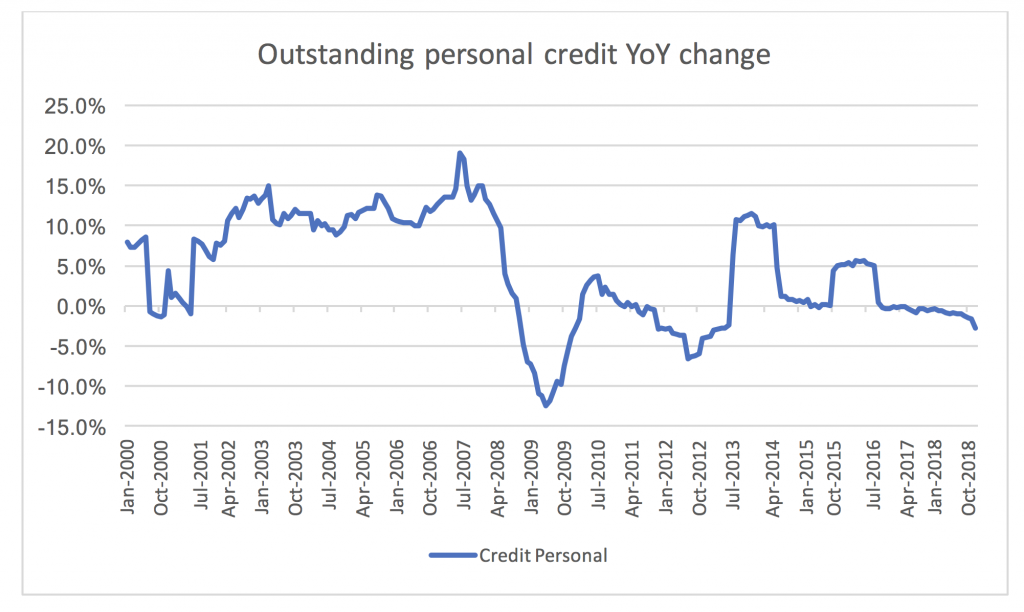 There is a lot to say about the long-term amount of credit but let us focus on the last couple of years where we can see that the amount of personal credit has been in decline since October 2016 with an accelerating trend downwards. We should remember that this is in an environment of almost 2 per cent per year population increase and positive (albeit low) inflation meaning that the amount of personal credit in a real term per capita is decreasing even faster.

Indeed, if we look at the flow of new money going to personal credit (outstanding balance is determined by new credit issued less the amount repaid), we can see that we are indeed seeing a reduction of new personal credit by more than 10 per cent on a year on year basis currently. 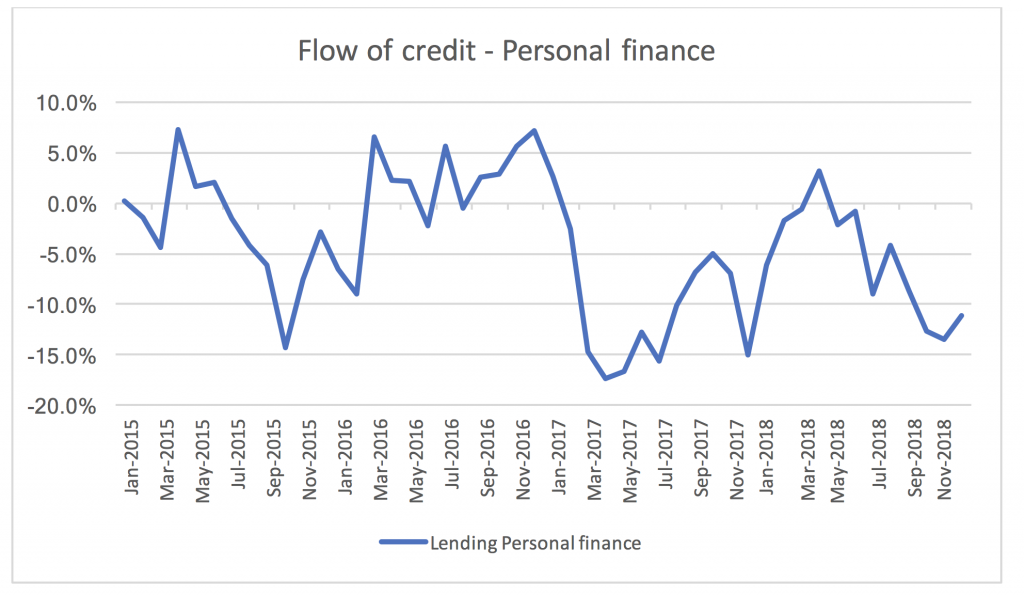 So what does this mean? As described in previous posts, overall consumer spending is traditionally described as a function of:

In addition to spending, we can also consider the amount of credit that people take on; as we can see above, the current trends do not look good for overall consumer spending and retail exposed companies.

The caveat is of course that the data does not capture all sources of credit but as it does capture all the major banks and most other financial providers active in Australia, it should give a pretty accurate picture. The one source of credit that is not captured in the data is the buy-now-pay-later type of credit like Afterpay, but given that ASIC found that the total debt outstanding for the players was $903 million and the total fall in personal credit outstanding between now and the peak in December 2015 is about $6 billion, I think it is fair to say that this is not a major factor.