A couple of years ago, I wrote an article highlighting the steep uptick in M&A activity in 2018 involving companies in Australia with 109 announced transactions with a total transaction value of $92 billion when applying a cut-off of $100 million in transaction value. As our financially aware readers are probably aware, there has been significant M&A activity in the Australian market over the last year and as we approach the end of the year, I thought it would be interesting to see how 2021 compares to previous years.

The table below lists all deals using the same criteria as the previous blog post (i.e. a cut-off of deal size of $100 million) and we can see that it has indeed been a spectacular year for M&A bankers out there with a total of 169 deals announced and a total deal value of $220 billion or about 2.4x the amount referred to in the previous blog post:

To put things even further into perspective, let’s have a look at the total deal value so far in 2021 compared to the previous decade. We can see that 2021 is indeed at least 60 per cent better than the previous years in 2015 and 2017 when total deal value of around $135 million per year were announced: 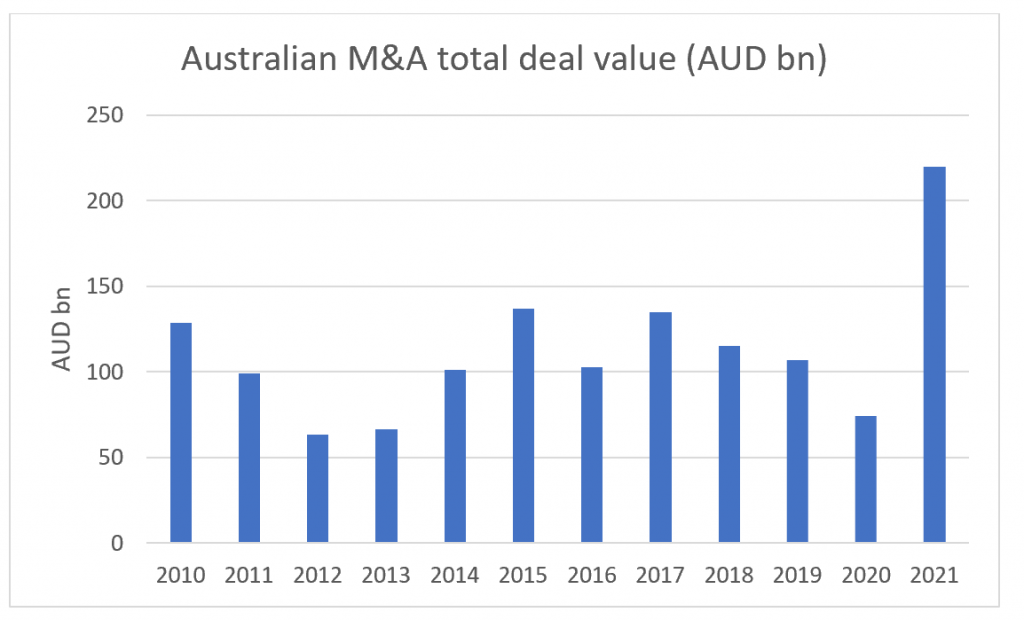 And the year is still not finished as CSL has gone into a trading halt pending an announcement of a proposed acquisition of a Swiss company called Vifor for a rumored $16.7 billion which will push the total deal value for 2021 higher still.

So what is driving this M&A frenzy. There are of course a lot of different reasons but I can think of a few in particular worth discussing:

So, what is my prediction going forward, will this continue?

It is of course very hard to predict but I see the conditions that created the current upswing in M&A all continuing into at least the near future with increased certainty that the pandemic will eventually be behind us, continued geopolitical tension making further rejigs of supply chains necessary and continuing accommodating central banks providing a lot of liquidity all unchanged from the year gone by. Of course, if we were to see rapidly rising interest rates or some other shock to the overall system, we should expect rapidly falling M&A activity.

My advice from the blog post linked below remains, investors should probably not try to predict M&A as the market is efficient enough that if it is obvious that a company is a takeover target, the share price has probably already reacted. Investors should continue to seek out the companies that they believe can over time provide the best fundamental return through a combination of value accretion and dividends as they grow organically and see potential M&A as the “icing on the cake” if another company/investor sees the same attraction as you and decides to accelerate your returns through paying you know instead of over time.

Here is the link to read my previous blog post: Can an investor profit from M&A activity?