Is political gridlock in America’s future?

Is political gridlock in America’s future?

The US general election takes place on November 3, 2020 and, as always, the combination of results between the winners of the Presidency, the House of Representatives and the Senate will shape the political landscape of the world’s largest economy for years to come.

Four years ago, the surprise was not only that Donald Trump won the Presidency. It was that the Republicans took control of the House and the Senate as well – unleashing a two-year period of functional legislative process unencumbered by Democrats seeking to block the Republican agenda. Most notable of the legislation passed was the Tax Cuts and Jobs Act of 2017 which included a reduction in the US corporate tax rate from 35 per cent to 21 per cent. Upon the Democrats winning back the House in 2018, political gridlock returned as neither party could typically agree with the other’s legislative proposals.

Upon estimating the probabilities of possible winners of the White House, the House of Representatives and the Senate, we arrive at the following broad conclusions:

We estimate the probability of a Biden victory for President to be approximately 70 per cent. This is consistent with estimates provided by FiveThirtyEight. Interestingly, many statistical models arrive at higher probabilities, while the betting markets imply lower probabilities.

We then see the House of Representatives being retained by the Democrats with an 85 per cent probability, while the Senate is a 50/50 line ball, in our estimation.

Combining these probability estimates results in a 30 per cent probability of a Democratic “clean-sweep” of the White House, the House and the Senate. Under this scenario, the Democrats would likely remain largely unencumbered to pursue their legislative agenda. This would likely include higher corporate taxes – a clear negative for US equities. But this would also likely include substantial additional fiscal spending – a clear positive for US economic growth (and US equities). 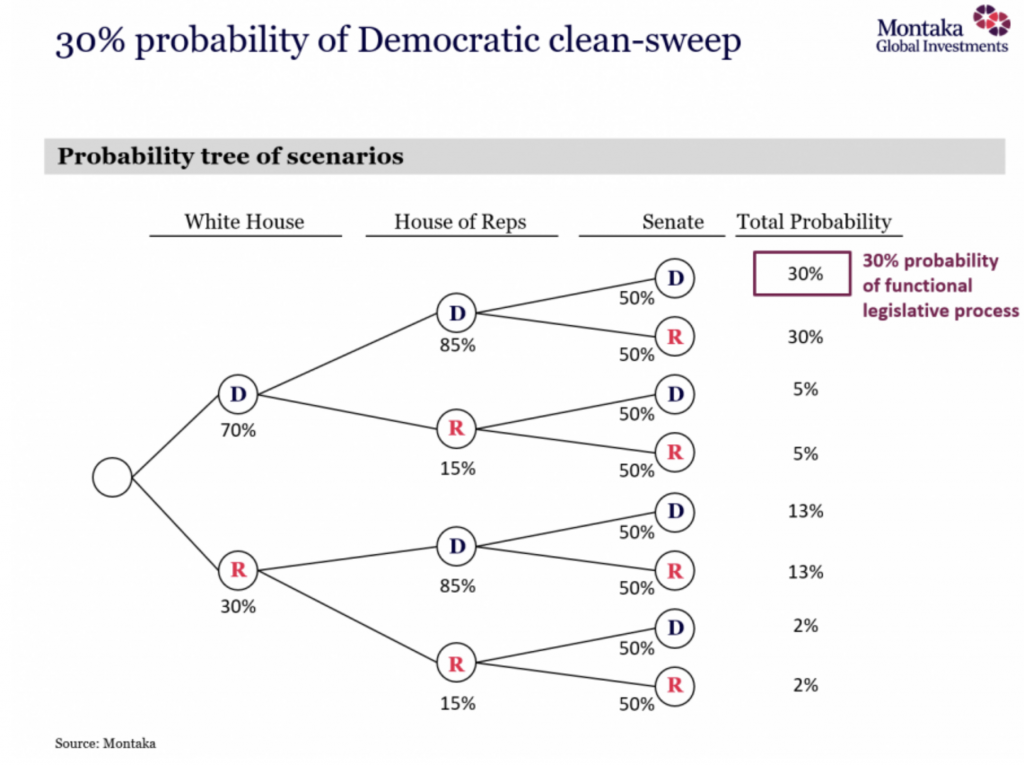 Political gridlock and resulting legislative dysfunction arises from each party controlling at least one of the three bodies required to pass legislation. Given the political divide that exists today, recent history has shown that the Democrats and Republicans tend to agree on very little when it comes to passing legislation.

As illustrated below, based on our probability tree, we see a 70 per cent chance of this scenario playing out – more than double the probability of a Democratic clean-sweep. And this presents a downside risk for the US economy to the extent that additional COVID-19 stimulus is required in 2021 that is either blocked, or watered-down, by the opposing party. 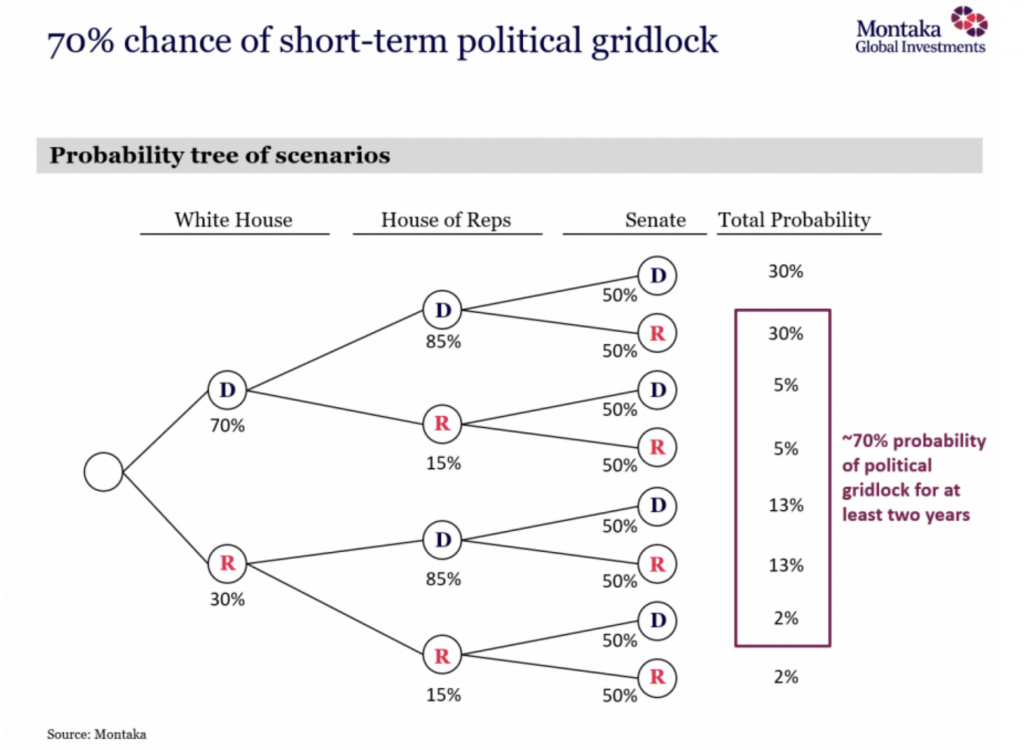 Finally, it is worth considering the long-term implications if Trump retains the Presidency – a scenario which carries a 30 per cent probability, in our view. As American writer and historian Jon Meacham put it recently, if Trump wins this election, the lesson for the Republican party will be that Trump’s brand of politics is the ticket to power. And for Democrats, the takeaway will be that they tried to win with a moderate – which did not work, so the party needs to shift further left. “So you end up with these poles with almost nothing in between…” And long-term political gridlock and legislative disfunction would likely be the result. 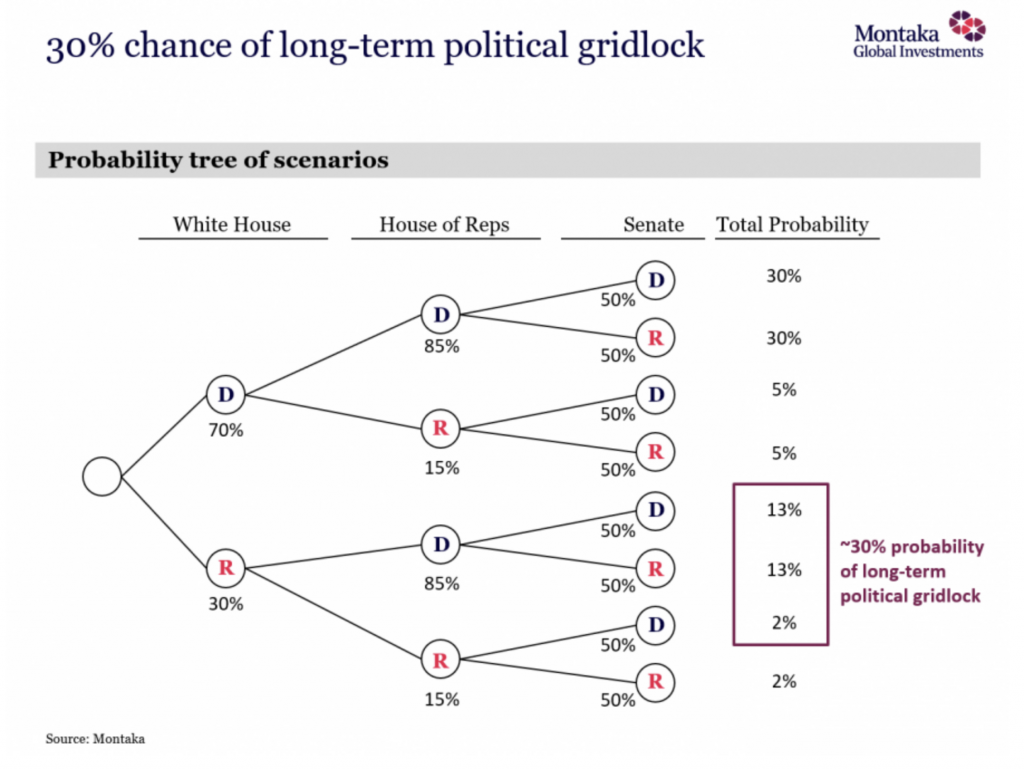 The Montaka team estimate the probability of a Biden victory for President to be approximately 70%. See the probabilities and scenarios in this article. Click To Tweet