Is bitcoin delivering on its promise?

Is bitcoin delivering on its promise?

This roller coaster ride prompted a vigorous debate in finance circles, with supporters forecasting extraordinary ongoing gains, and detractors calling a speculative bubble that would collapse into nothing.

It would be fair to say that the detractors included some well-respected thinkers, with the “bubble” call being made by no less than eight winners of the Nobel Memorial Prize in Economic Sciences and a number of central bank officials. It would also be fair to say that the detractors enjoyed something of a victory, given the speed and extent of the price decline that followed the December 2017 peak.

However, it would also be fair to note that subsequent to the 2018 lows, the price of Bitcoin has roughly tripled, and while the 2017 surge looks to have been very much overdone, the jury is still out on whether Bitcoin will ultimately realise its promise as serving of a legitimate store of value.

One thing that is clear is that it is almost impossible to put a value (as opposed to a price) on Bitcoin.  Much like gold, it produces no cashflows that can be fed into a valuation model and, much like gold, it derives its market value from a combination of a) people believing that it should have value, and b) scarcity.

Antipathy to valuation has never held back gold, however, and where these two conditions can be satisfied, it is entirely plausible that Bitcoin could become a mainstream financial asset and a legitimate alternative to gold as a store of value.  Indeed, given advantages in terms of storage and transport it could be seen as superior in some settings.

As such, if we were to see Bitcoin sustaining a generally rising price over an extended period of time, particularly if accompanied by declining volatility, we might reasonably conclude that it is in the process of becoming that legitimate alternative asset.

Which, by the way, is pretty much what has been happening these last ten years. 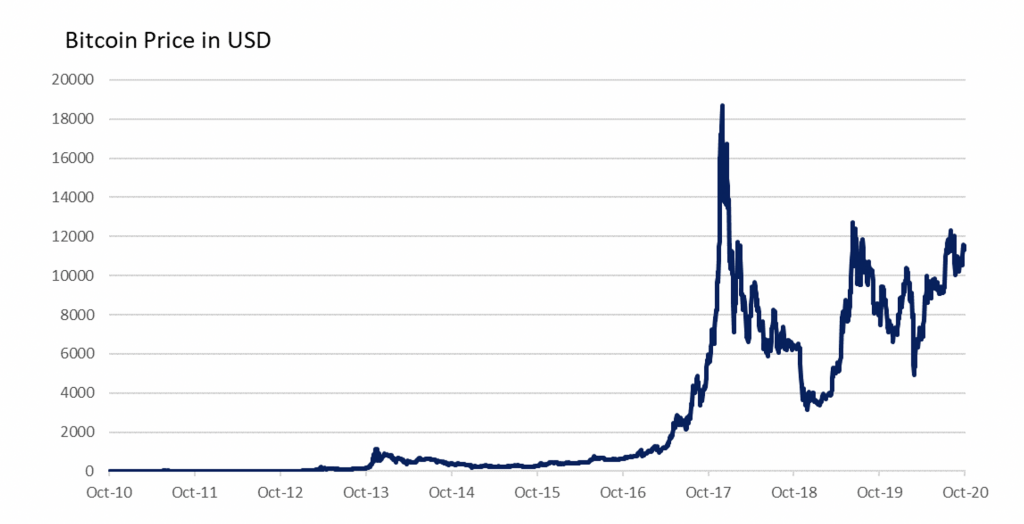 Much like gold, Bitcoin derives its market value from a combination of a) people believing that it should have value, and b) scarcity. Tim questions whether it will ever become a legitimate alternative asset. Click To Tweet
MORE BY TimINVEST WITH MONTGOMERY

Tim joined Montgomery in July 2012 and is a senior member of the investment team. Prior to this, Tim was an Executive Director in the corporate advisory division of Gresham Partners, where he worked for 17 years. Tim focuses on quant investing and market-neutral strategies.