How much energy is Bitcoin mining really using?

How much energy is Bitcoin mining really using?

If Bitcoin mining were a country, it would rank as the world’s 55th largest electricity consuming nation, just ahead of New Zealand.  And that’s the best-case scenario. In reality it could rank even higher.

Most readers are familiar with Bitcoin and other cryptocurrencies and the associated blockchain ledger. There are many opinions and views of the usefulness and value of the different coins and concepts. To me, it is clear that some parts of the technology associated with cryptocurrencies will become immensely useful in the future. It is also very clear to me that the decision to base Bitcoin on a “proof-of-work” (PoW) will in retrospect be regarded as one of the worst decisions that could have been taken from a societal environmental perspective.

The finer details on how Bitcoin mining works is outside the scope of this post but in very simple terms new Bitcoins are issued each 10 minutes and are distributed according to PoW. In short, the PoW shows how much of a special mathematical calculation called SHA256 a Bitcoin miner has performed and hence how much he should be rewarded as the higher portion of the total calculations performed, the higher portion of newly minted Bitcoins a miner gets.

This design has led to an “arms-race” where Bitcoin miners accumulate more and more efficient computer hardware to try to “out-compute” each other and earn a bigger portion of the newly issued Bitcoins. The calculation of SHA256 does not serve any other purpose than to mine Bitcoins and hence the energy used is completely dedicated to increasing the portion of the Bitcoins that are issued each 10 minutes.

To calculate how much energy is used to mine Bitcoins, we can first have a look at this website where we can find this chart: 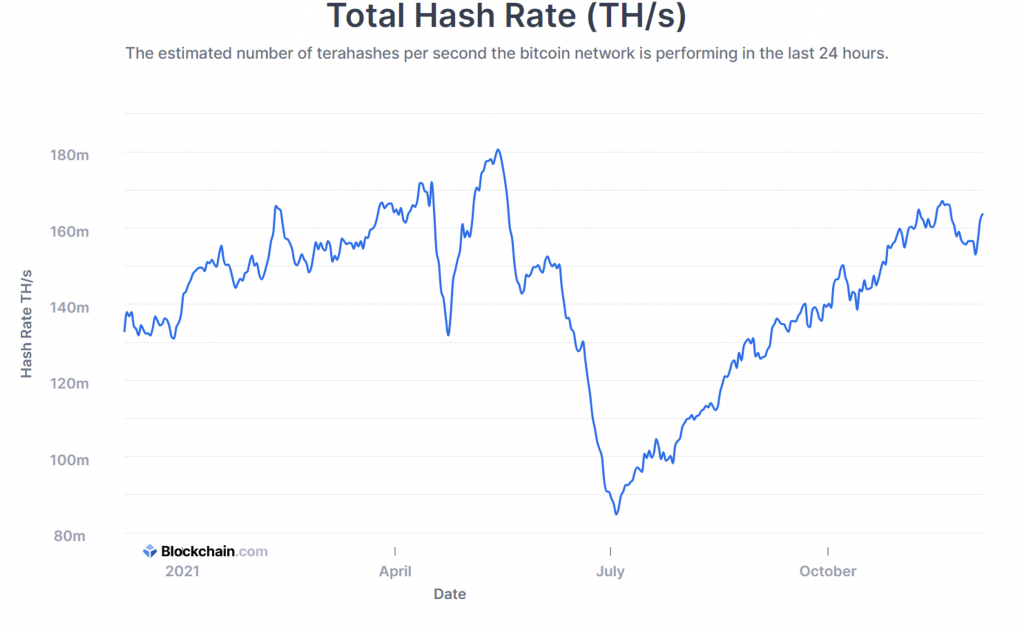 To calculate how much power is used to perform these calculations, we need to make quite a few assumptions about what machines are performing them. To come up with a conservative as possible estimate, let’s assume that everything is being mined by the most efficient machine which is currently the Antminer S19 Pro which has a hash rate of 110 TH/s and power consumption of 3250 Watts.

That is, we have calculated that the equivalent of 1.5 million of Antminer S19 Pros are currently busy calculating SHA256.

We can then calculate how much power these machines use:

Or on an annual basis:

We should keep in mind that the actual electricity consumption is in most likelihood significantly higher than the number we calculated as we have assumed that the calculations are done using the current state of the art equipment whereas in reality a lot of the calculations are performed by older less energy efficient hardware which at current Bitcoin prices are still profitable.

The carbon footprint of this activity is hard to measure as it will depend on where the mining takes place and if it is powered by renewable energy in places where this renewable energy would not have been able to be used to displace fossil fuel produce electricity. If we take the current electricity carbon intensity of Australia of around 0.7 ton/MWh, it is the equivalent of about 30Mtonnes of carbon dioxide being released each year which again is similar to the carbon dioxide equivalent emissions of New Zealand.

To have this amount of computing power and electricity consumption being dedicated to Bitcoin miners trying to outcompete each other is completely mindboggling to me. There are other methods apart from PoW that have been proven to work and to be just as safe. Ethereum have recently announced that they will transition from PoW to Proof-of-Stake (PoS) and if the Bitcoin protocol was changed in a similar way the world would definitely be better off…