How long will the shift in retail spending continue?

How long will the shift in retail spending continue?

One of the thematics from the last few months has been the material change in retail spending. With COVID-19 related lockdowns and restrictions on population movement and activity, the ability to spend on services such as out of home entertainment and activities has been significantly curtailed.

At the same time, household income growth has remained robust as a result of Federal Government stimulus initiatives such as JobKeeper, JobSeeker and the early superannuation access scheme.

While the chart below only shows the growth in income paid into CBA customer accounts rather than the whole economy, it provides an indication of the importance of government payments in driving household incomes since the pandemic began to have a material impact on the Australian economy. 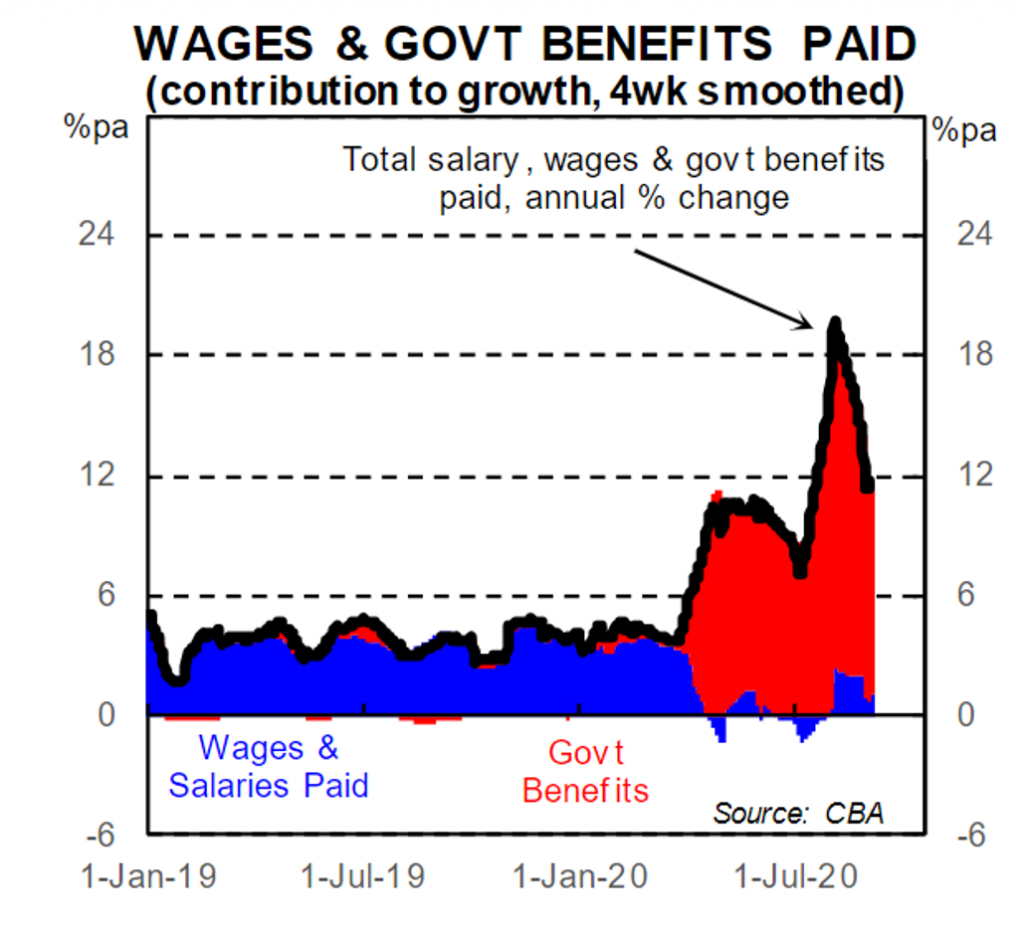 Restrictions on population movement and activity has seen spending on services like recreation fall, as shown in the chart of card-based spending growth by CBA customers below. 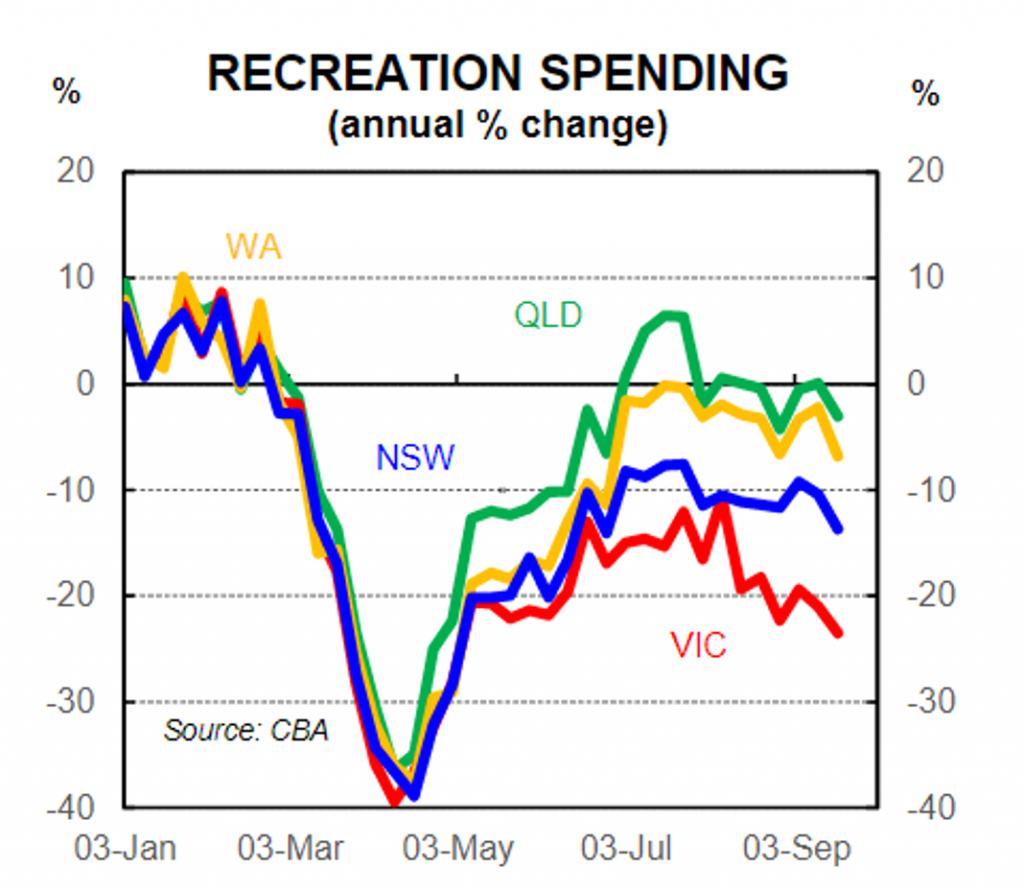 With income growth accelerating on an aggregate basis, combined with a constrained ability to spend on services due to the pandemic, the allocation of income has shifted into a combination of increased savings/debt reduction and spending on goods.

The increased time spent in the home has seen this become the focus of the redirection of spending by households. 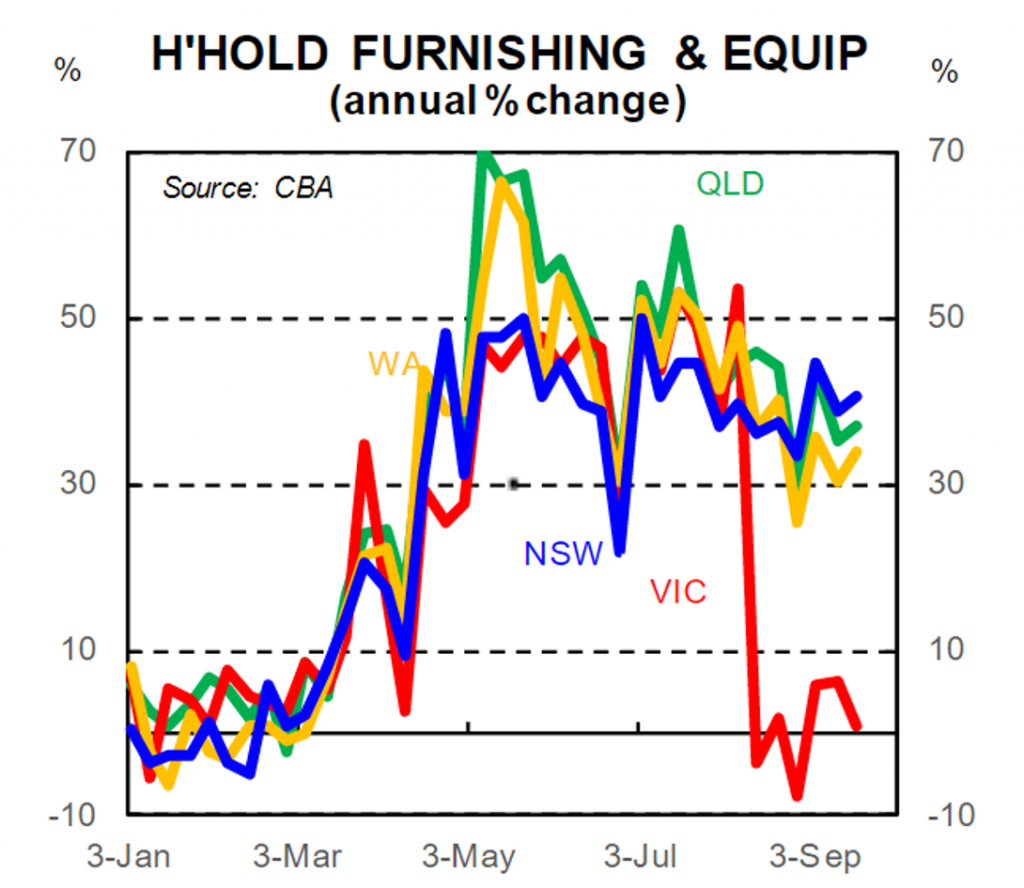 Not surprisingly, retailers supplying goods in segments such as Wesfarmers, JB Hi Fi, Temple & Webster, Harvey Norman, Kogan and Adairs, showed very strong results in the recent reporting season. These companies also showed that the strong rate of sales growth had generally continued into July and August in their outlook statements.

Could this reverse at some point?

The debate is how long can this strong growth continue and whether these are sales are being brought forward from future periods and sales growth will reverse at some point. This would result in a mean reversion of the absolute level of sales to more sustainable (lower) levels.

Earlier in the week the market learned of no visible sign of a mean reversion in this trend (as yet) with Harvey Norman providing additional evidence that the rotation of household spending has continued beyond August. The company reported that its Australian franchisee sales between 1 July and 17 September 2020 grew 34.5 per cent on a same store basis relative to the same period last year.

To put this in context, in its FY20 result the company stated that its same store sales grew 38.4 per cent between 1 July and 25 August 2020 relative to the same period last year. This update implies that same store sales between 25 August and 17 September increased around 24 per cent year on year. While this represents a slowing of growth, it is still extremely high relative to historical growth rates.

The first three months of the financial year generally represent a seasonal low point for sales, thereby boosting the percentage year on year growth rate for a given dollar lift in sales from an external event like the shift in spending patterns and government stimulus from the pandemic.

As we move into the more seasonally significant months in the December quarter, the growth rate is likely to moderate given the increased denominator, but even growth of half the current rate would produce material operating leverage and earnings upside for retailers like Harvey Norman, as evidenced by the 186 per cent growth in profit before tax generated by the company in July and August.

The Montgomery Small Companies Fund own shares in Adairs, Temple & Webster and Kogan. This article was prepared 23 September with the information we have today, and our view may change. It does not constitute formal advice or professional investment advice. If you wish to trade these companies you should seek financial advice.

A shift in spending due to COVID-19 has seen some retailers show strong results in the recent reporting season. How long will this growth continue and who will be the winners in discretionary retailing? Click To Tweet
MORE BY StuartINVEST WITH MONTGOMERY