Has NEXTDC caused some stormy weather in shortville?

Has NEXTDC caused some stormy weather in shortville?

Short selling is a consistent feature of the equity market and much was written earlier this year about Tesla’s equity journey with its short sellers. But what about the short selling story at NEXTDC (ASX:NXT), one of Australia’s most shorted stocks? Did shorting NXT pay off?

NEXTDC has been a popular short. In our view the shorts correctly identified that the company was going to hit an earnings air pocket in 2019 as it ran out of capacity to sell in the key Sydney market, and with NEXTDC’s growth being capital intensive the shorts were betting on the company not being able to raise growth capital on favourable terms.

Our view on NEXTDC

Regular readers will know our view; a structural growth story, a play on the $1 trillion (yep trillion) corporate computing market shifting to the cloud, and we are early in that trend. NEXTDC is digital infrastructure, backed by high returning hard assets that in the long run we expect to be valued for its stable visible cashflows, like a portfolio of commercial office buildings, but one that holds data centres hosting densely interconnected computing infrastructure powering commerce for today and tomorrow.  As we argued in our introduction piece in October 2019, NEXTDC is capital intensive, but management has a track record of delivering good sustainable returns backed by long term contracts, and as such we took the view that these deserved to be funded and that NEXTDC would be able to deliver funding on its own terms.

So did betting against this structural growth story make the shorts money? Was short NEXTDC a profitable trade?

Analysis of the short position

We pulled the short data, taking a look at the interval between the previous capital raise on 17 April 2018 when the company last raised to fund its growth at $6.43 and the recent capital raise on 2 April 2020 where they raised $672 million at $7.80.  The chart below covers the period concerned. 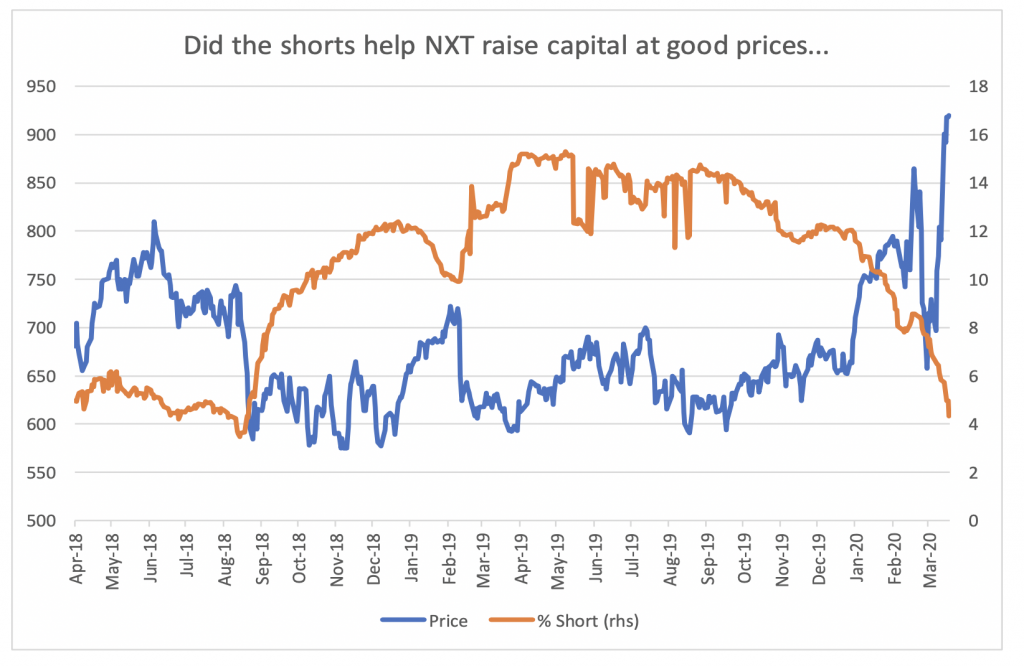 The chart shows the shorts started to build post its F18 results when the rapidly slowing momentum in NEXTDC’s earnings growth became apparent driven by the lack of sellable inventory in Sydney and the potential delays around the key S2 data-centre development. Shorts went from 4 per cent of issued capital in March 2018 up to 14-15 per cent of its share base at March 2019.  During this period the company’s shares underperformed many of its ASX listed technology peers. The shorts started to cover from October 2019 and stood at 4 per cent or so at the time of the most recent capital raise on April 2 2020.

But was this a profitable trade for the shorts?

The data says no. It hurt.

The table above aggregates the daily short volumes, and using the volume weighted average price (VWAP) on each day, we can calculate the aggregate dollar volume or value of the short position. Over the period concerned the shorts traded over $2.4 billion on both the buy and the sell side as the short base constantly adjusted its position. On April 2, the date of the recent capital raise there were some 17.1 million shares short.

Even in a best-case scenario (for the shorts), where NEXTDC and Capital Raise underwriters decided to sell the capital raise stock to the shorts (at $7.80) to allow them to cover their short positions it looks like an unprofitable trade. The price action on the day post the capital raise, where shares gapped to $10 post issuing capital at $7.80, is consistent significant short cover trading, as does the movement in the short position data we can see for 3 April.  It doesn’t look like the shorts got to cover their positions in size in the capital raise. Either way the shorts have had to fund losses to the tune of between $66 to $90 million over the period.

To add injury to insult, the short cover move from October 2019, where it looks like the shorts bought back around 35 million shares net over the period will likely have helped lift NEXTDC’s share price. Did NEXTDC take advantage and raise capital as the shorts covered? Probably.  One giant balance sheet re-set on terms favourable to shareholders courtesy of the shorts.

As Elon Musk tweeted about those who got burnt short selling Tesla stock: “Stormy weather in Shortville.”

The Montgomery Small Companies Fund  owns shares in NextDC. This article was prepared 14 April with the information we have today, and our view may change. It does not constitute formal advice or professional investment advice. If you wish to trade NextDC you should seek financial advice.