With another jump in inflation expected to be reported this week, the Reserve Bank of Australia (RBA) is justifying their rapid rate rise trajectory. But how will businesses and households respond?

The June 2022 NAB business survey quantified the market shift we have been expecting off the back of the volatility in the economic environment. Uncertainty on both the domestic and global landscape surrounding interest rate hikes, inflation and geopolitical issues are beginning to dishearten business conditions and confidence.

With inflation and looming substantial interest rate hikes on the horizon, business confidence sank below average for the quarter. The retail sector took the biggest hit recording a 21 point decline, now sitting in negative territory highlighting the concern about the future of household discretionary spending as increasing interest rates chew into disposable income.

Despite the 2 point drop in conditions, at +13 index points business conditions still remain well above average and demonstrates consistency across the states and most industries, including retail. Conditions for construction told a different story, shifting in the other direction with building costs soaring despite a healthy pipeline of work in the sector. Conditions for construction currently sits at a weak 0 index points after a 3 point decline in June.

Cost price growth hit new survey records in June, surpassing the previous peak seen earlier this year. Labour cost growth reached 3.6 per cent for the quarter and purchase cost growth at 4.8 per cent. As such, businesses continue to face rapidly escalating cost pressures with both purchase cost growth and labour cost growth running at record levels. This reflects the significant global supply shocks that are still flowing through, as well as domestic energy disruptions and the very tight labour market which we will run through later in this letter. As is to be expected, the higher costs are evidently translating into higher inflation and with the Consumer Price Index (CPI) being released next week we are anticipating the data will record further upward pressure on inflation despite the monetary policy response from the RBA thus far.

Forward orders and capacity utilisation had a very slight decline. The hope is that off the back of these results, business investment and hirings should continue over the coming months.

Viewed holistically, the survey highlights that businesses are growing increasingly wary of the economic outlook irrespective of the relatively positive position conditions currently presents. Next week’s CPI data will provide insight on whether the interest rate hikes are curbing the level of inflation and also how household savings and discretionary spending are playing out in response to the interest rate adjustments. According to the NAB Business Survey, the goods and services prices point to record CPI level for the second quarter of 2022 with their model suggesting that trimmed-mean CPI could be as high as 1.6 per cent quarter on quarter in Q2 (4.4 per cent year on year). NAB’s estimation would represent the fastest rate of underlying price growth on record in Australia, largely reflecting the global factors at play including ongoing COVID related disruptions to manufacturing in China off the back of COVID lockdowns, backlog and supply chain pressures, the impact of the Ukraine war on food and commodity prices as well as domestic disruptions from Omicron and multiple major flooding events. 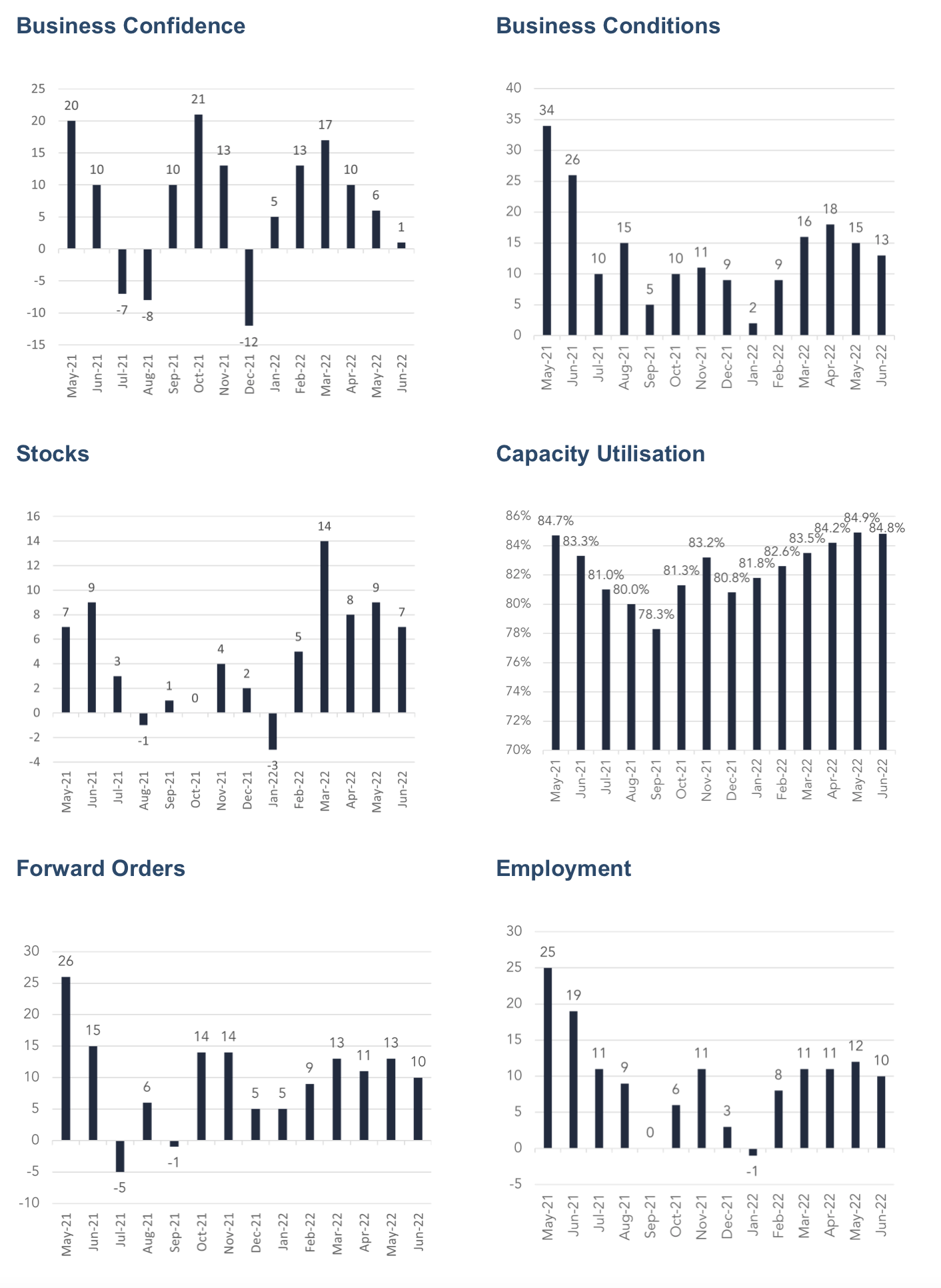 The tight labour market reflects a high demand from businesses as they face the present challenge of engaging and retaining workers, whilst also navigating ongoing labour shortages which have been amplified with a reduced number of skilled migrants coming to Australia.

The drop in the number of people working reduced hours due to illness in June was high, in line with high reported COVID and influenza case numbers. Around 780,000 people were reported to be working fewer hours than usual due to illness, which is almost double the usual number normally recorded at the start of winter. 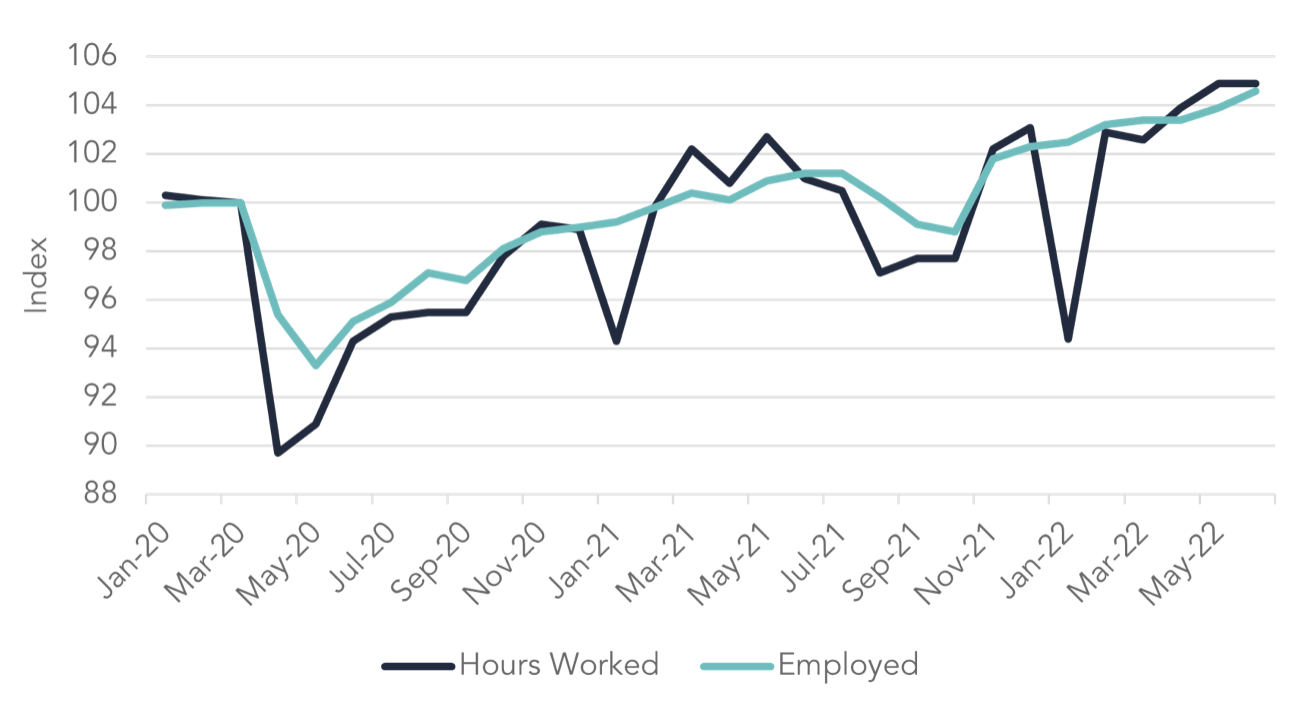 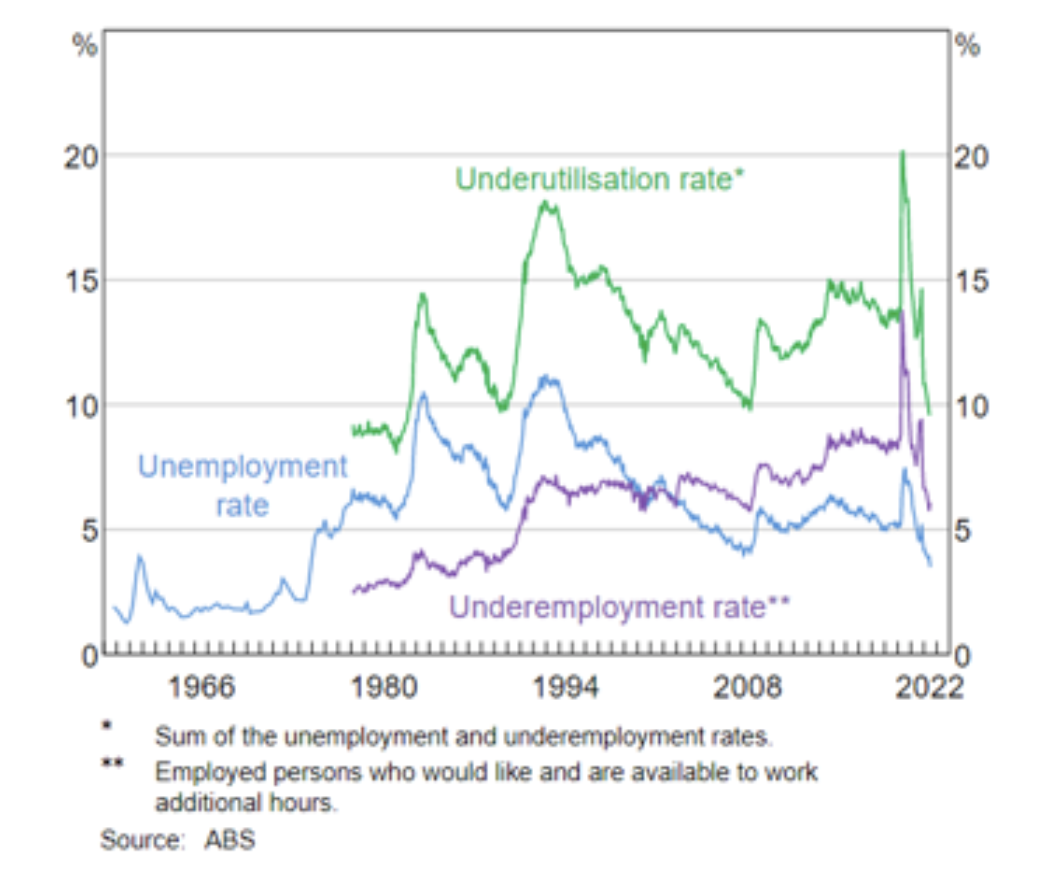 Recent Insights from the RBA3

According to remarks made by the RBA this week and in line with our expectations, CPI data for the June quarter set to be released next week will show a further step-up in Australia’s rate of inflation.

The policy challenge is for the RBA to rein in inflation to the 2 per cent – 3 per cent target range whilst also maintaining relative economic stability. The return to this whilst fostering economic growth and low unemployment will be a delicate balance.

The RBA acknowledges that great uncertainty makes the path forward difficult. On the global stage, the war in Ukraine does not have a definitive end in sight and supply chain disruptions are forcing business to raise the final price of goods and services which ultimately falls on the end consumer (us!). Domestically, the reduction in inflationary pressures will be determined by the psychology and response Australians have on the higher interest rate environment. Will Australians respond quickly with a swift reduction in discretionary spending, allowing inflation to subside; or will pent up household savings, as a result of the Government’s financial support and extremely low interest rate environment during the peak of the pandemic allow Australians to continue spending and continue to push prices up, exacerbating inflation. 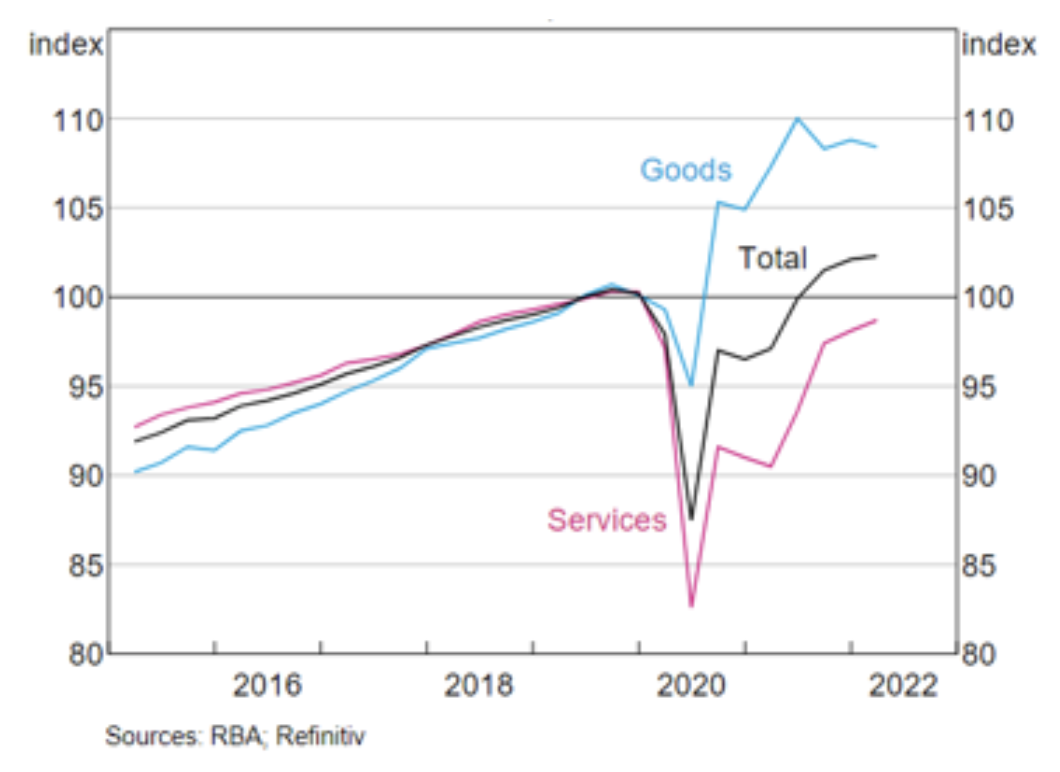 The RBA has flagged that hindsight could suggest the belief that too much support was provided by the  government and central bank during the pandemic, resulting in the current level of inflation. The unprecedented nature of a global pandemic made it difficult to truly know the impact the decisions made at the time would have had both in the short term and the longer term. The RBA believes that in the highly uncertain environment of the time, the right policy choice was to err on the side of caution and provide insurance to Australians against the potentially catastrophic economic consequences that could have eventuated as a result of a global pandemic. As an investment team, we were anticipating tightening of interest rates in February, and had been positioning accordingly as upward price pressure was very apparent, and frequently reported, particularly with food and building inputs. We were wrong on our rate change expectations by a few months. Our take was that the election was a partial consideration on the timing of rate movements by the RBA.

The path forward to bring inflation back in check requires an increase in supply and some moderation in demand. On the supply side it appears that supply chain disruptions are beginning to dissipate with delivery times improving and bottlenecks easing. The pricing of commodities over the past few weeks has also shown some reprieve.

On the demand side, the labour market is tight and with underemployment at a 50 year low the growth in demand in the Australian economy is pushing up against the capacity of the economy to meet that demand. The tight labour market places pressure on businesses to meet wage growth, increasing household savings which is only being chewed up by inflationary pressures – providing no fool proof solution to the problem. Again, the extent to which these levels are adjusted will determine how households and consumers react to inflation and interest rates. 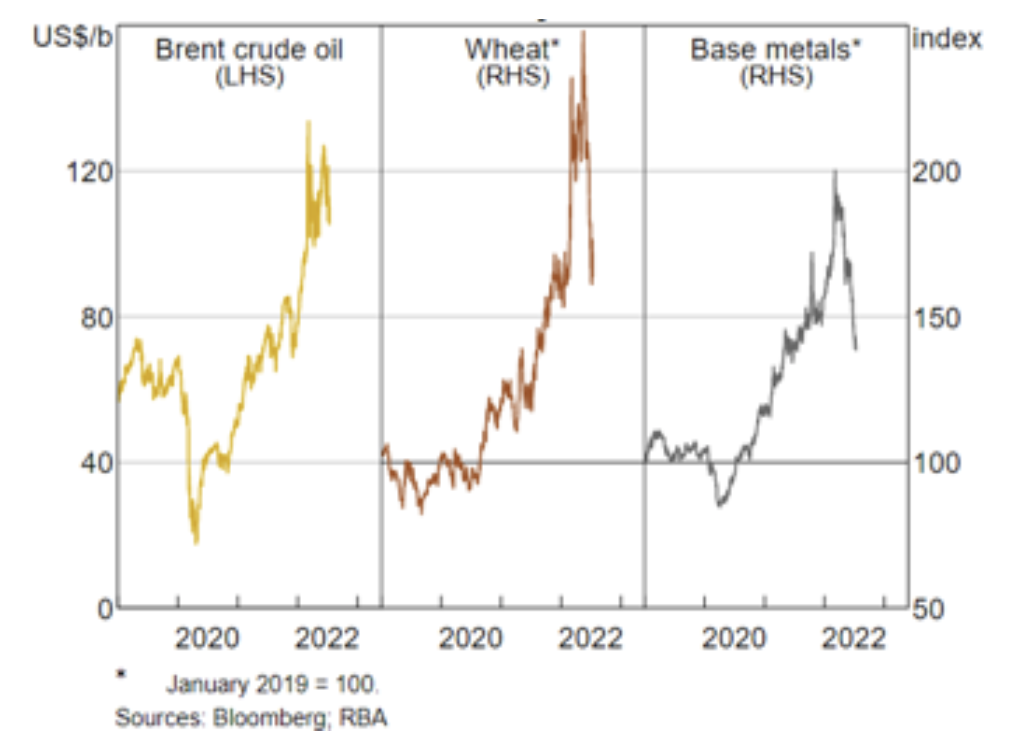 The concept of a neutral interest rate is one that is neither stimulatory nor contractionary. Practically speaking, the methods implemented to achieve this outcome remain uncertain, as the market response is largely unpredictable at this stage given the past few years of unprecedented support and current buffers households have maintained thanks to both government fiscal and central bank monetary policies. The RBA is now treading a very narrow path with the difficulty now setting interest rates that need to curb inflation without creating hardships for households that they fought so hard to preserve over the past few years. The neutral interest rate is therefore difficult to accurately assess.

All data points suggest that inflationary pressures are expected to continue for some time and perhaps worsen before they begin to fall back towards the RBA target. The question remains as to how household and consumers respond to an environment led by rising inflation and further interest rate rises. The response is uncertain and time will tell whether or not the fiscal and monetary support that has been provided to date, and any shift in such policies in the near future will bring inflation back into line. It is an interesting time, which follows a number of significant disruptions in a pandemic, economic shutdowns, broad based supply chain disruptions, and conflict.

It is not all doom and gloom though. On a positive note, households hold strong savings buffers, there are relatively low interest rates on a longer term trend basis, unemployment is at its lowest level in almost 50 years, and the country was arguably one of the best performers globally coming out of the COVID episode. We have seen some businesses building resilience in the last two years, and in our view, those that have been able to prosper throughout a difficult two years and are looking to grow are worth backing. We remain very cautious on retail and construction exposures, as we believe these two sectors will face some headwinds in the coming months.

The Fund is seeing positive growth in the loan pipeline from our panel of lenders, with strong drawdown forecasts. On a portfolio level our lenders are continuing to see strong demand from business to fund high quality loans demonstrating their ability to be selective in their borrower base. In some cases, we are seeing higher quality applicants coming into the funnels which is positive.

Next week the quarterly Consumer Price Index data is released which will provide us with an insight into how the market is reacting to the rapid rise in interest rates and expectations that rates will continue to follow an upward trajectory. As previously noted, we are exposed to short dated fixed rate exposures and floating rate exposures within the portfolio. The variable rate exposures will benefit from a rise in rates, and we will be able to reinvest repayments on the short dated fixed at the reset market rates.

In light of the recent threat of foot and mouth disease, we wanted to note that livestock is covered by the Emergency Animal Disease Response Agreement (EADRA) a government backed biosecurity initiative, which repays farmer’s market value for any livestock destroyed for Australian biosecurity purposes.

You are reading an article about: Aura Group