What the health reforms mean for your wallet, and private health businesses

What the health reforms mean for your wallet, and private health businesses

The Australian government has just announced a raft of changes to private health insurance. The reforms should make health cover more affordable, and more attractive for consumers. And this in turn should be beneficial for hospital operators, at least in the short term.

The deteriorating affordability of private health insurance has seen increasing numbers of consumers downgrading and/or dropping private health insurance cover. The Government has been running a number of reviews into the healthcare system over the last few years in order to improve its efficiency. The Minister has long stated that he is targeting annual premium increases below 4 per cent to reduce the pressure on policyholders to some degree.

The reforms are designed to achieve this outcome in the medium term.

It is hoped that cutting claims costs and increasing the transparency of product benefits and costs to the consumer will improve the product appeal to the consumer.

The private health insurance participation rate has been falling from its peak in June 2015 on the back of annual premium increases that have exceeded the broader rate of price inflation in Australia by a wide margin. The annual industry average premium increase net of the Federal Government rebate is shown in the chart below. 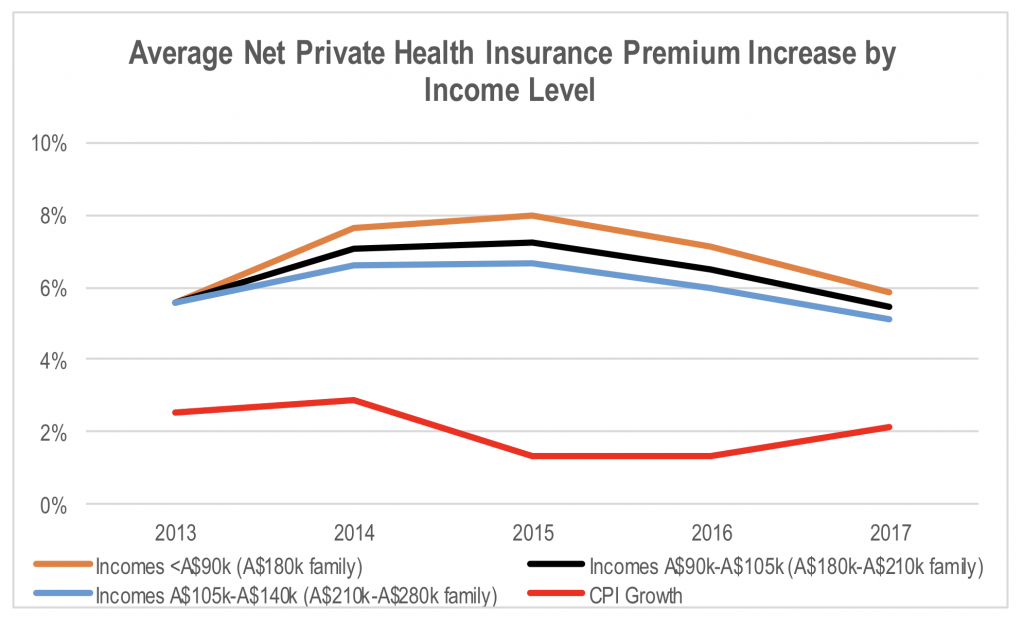 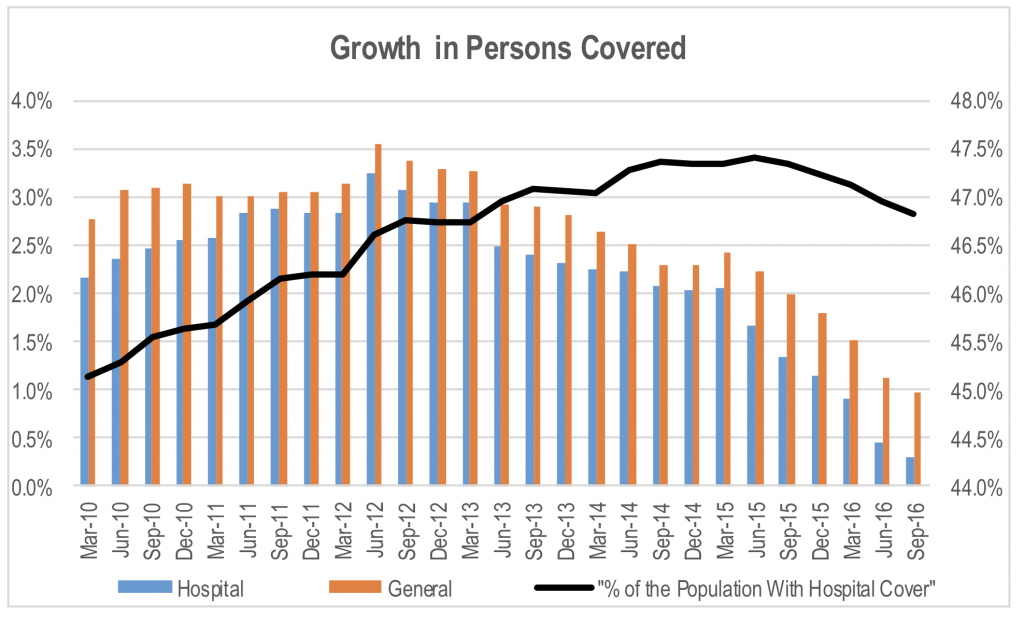 Falling participation and policy downgrading is an issue for the Federal Government as it shifts consumers back into the public system, and the full cost of healthcare back onto the taxpayer. Falling participation and downgrading is also an issue for private health insurers and hospital operators by reducing revenue growth and potential demand growth. So, any improvement in affordability that reverses this trend is beneficial for all parties.

However, the reforms announced only provide one off benefits, albeit one off benefits each year for a few years. It does not fix the fundamental problem that a community rating system in conjunction with an aging population creates an increasing disincentive for healthier/younger people to participate and cross subsidise the growing cohort of older more expensive policyholders.

The chart below highlights the problem. This shows the average annual private health insurance premium for basic and top level cover for Medibank, NIB and Bupa net of the government rebate, and compares this to the average dollar value of benefits paid per covered person by age group. 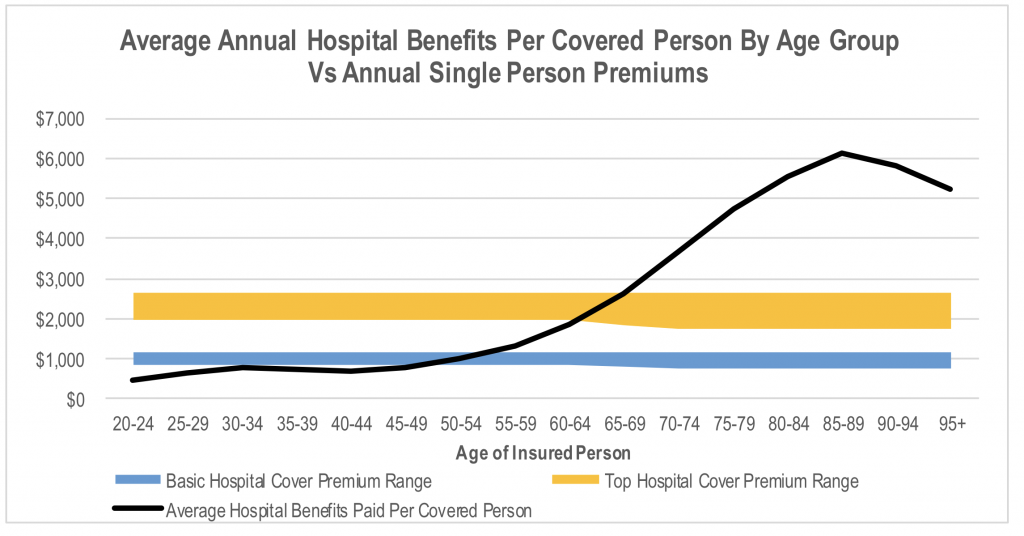 The chart shows that the average premium paid by the consumer is well above the average annual benefits per covered person until the person is over 50 years old. Admittedly, the benefits per covered person does not adjust for the level of cover. Therefore, the average benefits paid to someone with basic cover is likely to be lower than the overall average given their policy covers fewer procedures. As a result, the cross over point between the average benefits received and the average premium paid for someone with a basic hospital policy is probably at an older age than shown in the chart. The opposite would apply to the cross over point for top level cover.

The nature of insurance is to protect the individual from extreme adverse outcomes through averaging risk. Therefore, just because the average benefits paid are below the premium for people aged below 50, it doesn’t mean that the product is a bad deal as the average is a blend of a lot of people with zero or low benefits and a few people with very high costs. Normal human risk aversion means consumers should be willing to pay a premium to the average amount of benefits paid in order to avoid potential exposure to healthcare costs at the top of the range of outcomes.

But there are a few issues with this. The aging population base is resulting the average benefits being paid across the population increasing at a faster rate than inflation due to the average age of covered persons increasing over time, shifting the covered population increasingly into the high claiming age cohorts. This requires the insurers to lift premiums by more than inflation to cover the increase in claims costs. As premiums increase relative to inflation, the premium being paid over average benefits received for younger people (or the premium for risk aversion) increases making the product less attractive. As younger people drop out or downgrade coverage, the rate of increase in the average age of policyholders accelerates beyond that resulting purely from natural demographic shifts caused by the aging of the population, resulting in even faster growth in average claims costs per covered person.

The other issue is in regard to whether consumers are aware of the potential cost that could be incurred if they are unlucky with their health. Younger people tend to be less in touch with their own mortality. As such, some could undervalue the benefit of protecting themselves with extreme adverse health outcomes.

While reducing the price for prosthetics paid by insurers will reduce claims cost growth in the year the price reduction occurs, it does nothing to holt the driver of accelerating growth in average claims costs. Additionally, research by one of the insurers indicates that the A$88 million of price reductions announced last year did not show up in claims costs this year. This might create a reticence in insurers to factor in the forecast benefit ahead of receiving it.

Allowing people under the age of 30 to receive a discount on premiums provides some unwinding of the community rating system, but a 10 per cent discount is unlikely to result in a significant enough change the economics of insurance to drive a meaningful uptake of people in this age group. However, the need to discount premiums to existing policyholders that are under the age of 30 will inevitably need to be funded by a larger increase in premiums to everyone else.

Ultimately, the answer to this problem in allowing insurers to price risk on an individual basis is politically impossible. Pressure on the system is likely to be an ongoing feature of the market.

Ultimately, policy will need to rotate away from the carrot and back to the stick. The stick the Government has relied upon to date has been the Medicare surcharge. The charts below show the annual cost of the current Medicare surcharge at a range of gross income levels for both singles and couples/families. This is compared to the average annual premiums for basic and top level hospital cover for Bupa, Medibank and NIB new of the government rebate. This appears to be a reasonably compelling proposition for anyone earning more than A$90,000 as an individual or A$180,000 as a family given the benefits received from private health insurance. 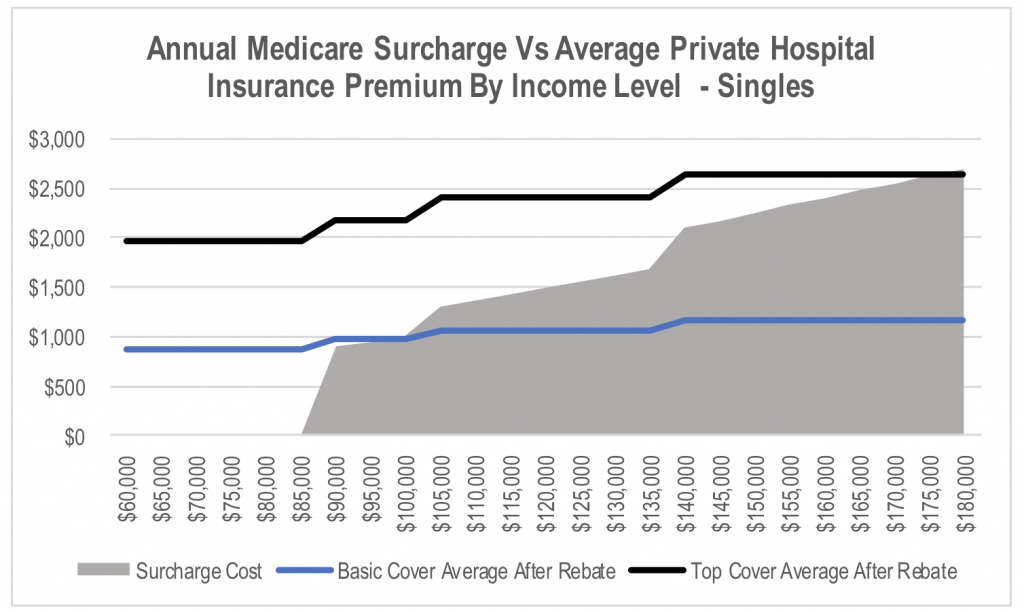 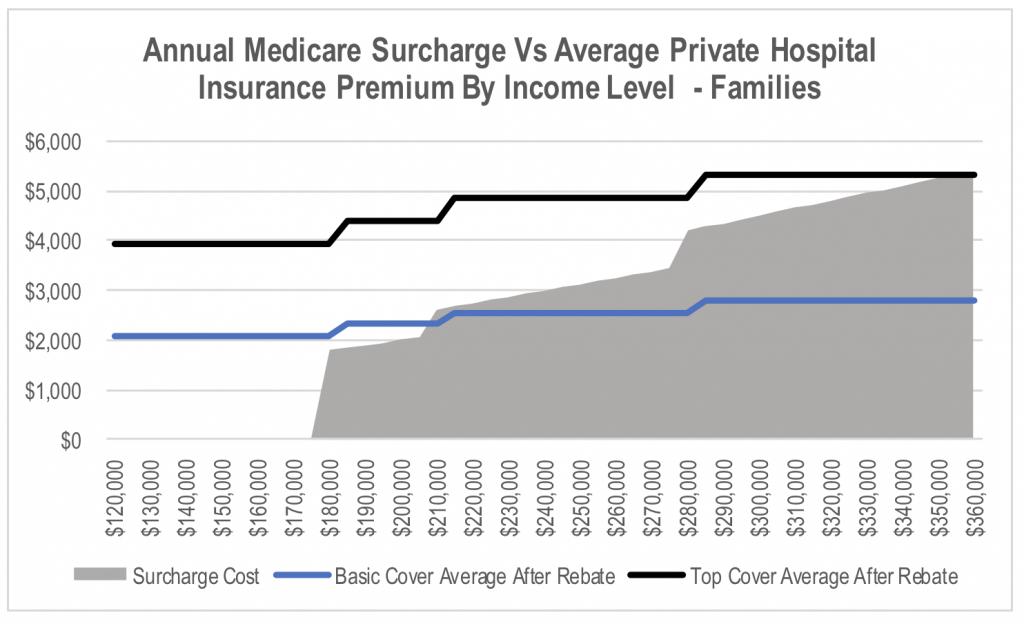 The problem is that with annual premium increases having exceeded wage growth for a number of years, the size of the stick has been shrinking over time. This can be seen when we look at the same chart but using data from 2011. 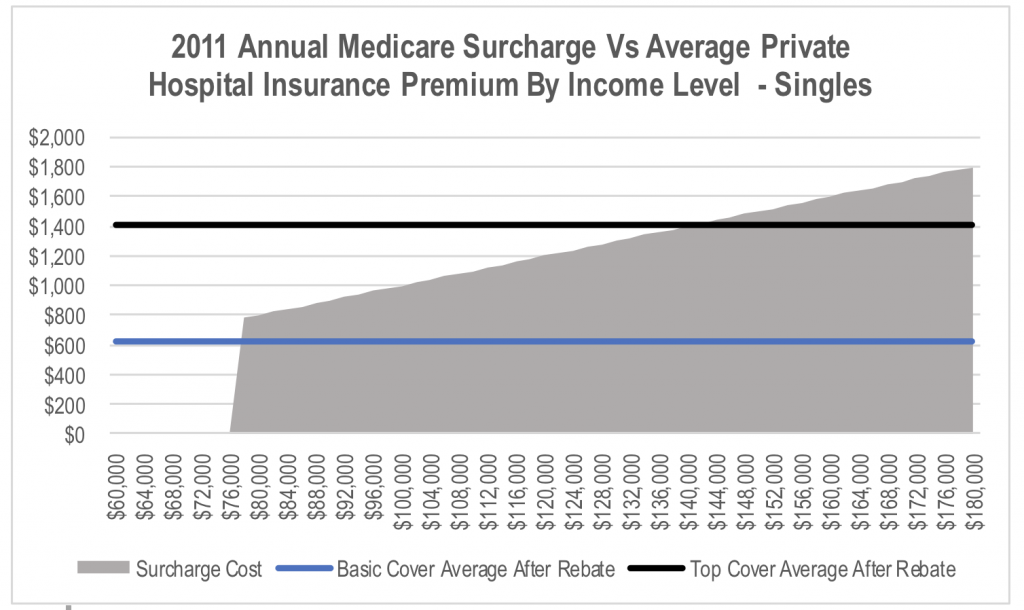 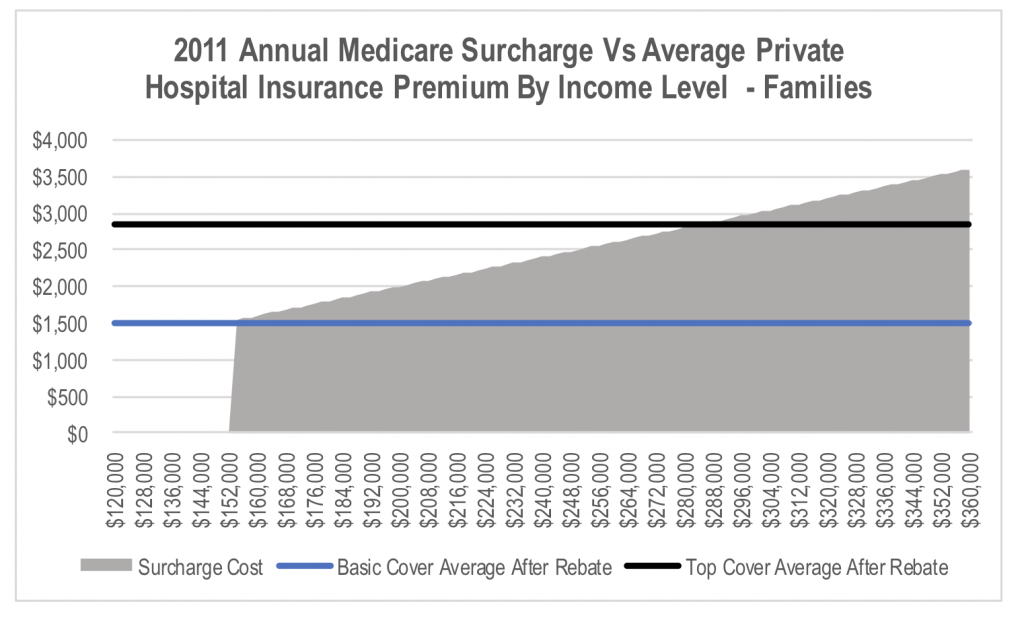 While increasing the size of the stick to catch up with the rate of premium increases would be politically unpopular, it would be far more palatable than allowing risk adjusted pricing of policies. In the short to medium term, one off changes to the system will reduce the impact of the rising average age of policyholders. The question is when rather than if the budget pressure overwhelms the political cost of increased penalties for opting out.

The Montgomery Funds own shares in Medibank Private