The headwinds faced by the big four banks

The headwinds faced by the big four banks

As they say, “when it rains it pours” and that can certainly be said for the major banks in Australia as they are confronted with a raft of issues and a new development with their New Zealand operations.

Some of the current issues include:

To further add to the headwinds faced by the banks, New Zealand has joined in with its own contribution. In December 2018, the Reserve Bank of New Zealand (RBNZ) released its proposal for new bank capital requirements. This incorporated two elements:

Additionally, contingent convertible debt (currently accounting for 16 per cent of Tier 1 capital) will no longer qualify.

The RBNZ estimates that this will increase the amount of capital that a bank needs to hold by between 20 per cent and 60 per cent.

The new requirements would be phased in over the next five years. The chart below shows that the Australian bank operations in New Zealand would be compliant with the new tier capital requirements until 2021 given their current average capital levels. 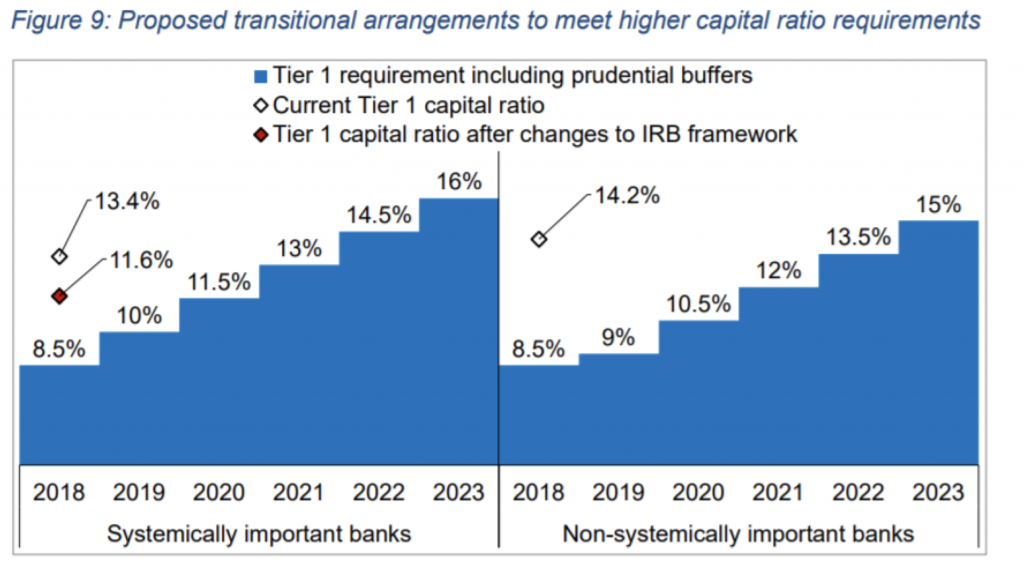 Submissions on the proposals will be taken until 29 March 2019, with a final decision likely in the second half of 2019.

So these two changes result in a double whammy to capital requirements by requiring the bank to raise an additional $2.50 of capital for the change in risk weights, and a further A$3.375 for the increase in the minimum CET1 ratio, resulting in a total increase in capital of $5.875.

What is the impact for the big 4 with NZ operations?

The RBNZ calculated that the increase in risk weighted assets for the four Australian majors would be NZ$39 billion or 15.5 per cent based on their 31 March 2018 loan books. This means the majors would need to increase the amount of Tier 1 capital held by 15.5 per cent to maintain the same Tier 1 ratio in their New Zealand operations.

The impact from the increase to the minimum ratio increases capital requirements by a further 70 per cent for the Australian banks’ operations in New Zealand.

The increase is the result of a significant increase in the prudential/conservation and counter-cyclical buffers (from 2.5 per cent to 8.5 per cent and from 0 per cent to 1.5 per cent respectively). Note that the 6 per cent regulatory minimum is a hard limit in the banking license. The 10 per cent on top of that for prudential buffer can be breached but would result in escalated supervisory responses and limitations on dividends.

Based on 31 March 2018 figures, the two changes would add NZ$20.7 billion to the minimum amount of CET1 capital the Australian major banks would need to hold in their New Zealand subsidiaries. Of course, the banks hold more than the minimum requirement, so the increase in capital required will be somewhat less than this, but similarly, the banks will want to hold a buffer above the new 14.5 per cent minimum to avoid any risk of a temporary reduction and consequent regulatory action.

The RBNZ estimates that the majors would achieve the new higher capital requirements within the target five-year timeframe if they were to retain 70 per cent of the earnings generated by their New Zealand business.

What does this flow to earnings growth?

In isolation, higher capital requirements result in a reduction in return on equity (ROE) for the banks, forcing them to retain more capital from future profits to fund a given level of growth. As a result, earnings growth has lower value as the sustainable dividend pay-out ratio is reduced.

The reality is that the impact of higher capital requirements on ROE is likely to be at least partially offset by wider lending spreads (higher loan interest rates or lower deposit rates), a renewed push on cost efficiencies, a reduction in the banks willingness to lend to riskier or lower return customers, and/or higher fees to boost profitability.

With these measures impacting all lenders in the market, the impact on ROE is felt by all players, so there is incentive for all banks to try to boost profitability to offset higher capital requirements. This effectively shares some of the cost of the higher regulatory requirements with other stakeholders like customers (more expensive products) and employees (reduced headcount).

How much capital are we talking here?

Sell side brokers have estimated that the changes would require the Australia and New Zealand  Banking Group (ANZ) to hold approximately A$4.5 to 5.5 billion more capital than under previous regulations. This equates to around 6-7.5 per cent of ANZ’s current market capitalisation. ANZ has been perceived to have had excess capital to meet APRA’s new requirements due to a number of asset sales, which could allow it to continue to return capital to shareholders through buy backs. However, the proposal from the RBNZ, combined with question marks around the sale of its Wealth Management business to IOOF, reduces the excess bank’s capital position and therefore the potential for ongoing capital management.

National Australia Bank (NAB) is estimated to be the next most impacted, with it needing to hold A$3.8 to 4.2 billion more CET1 capital, equating to 5.5-6.2 per cent of its market capitalisation. The issue for NAB is one of its ability to maintain its current high dividend payout ratio and/or the need to raise incremental equity to meet the new APRA regulatory requirements by next year.

Westpac (WBC) and the Commonwealth Bank of Australia (CBA) are proportionally less impacted by the proposed changes with the estimated increase in CET1 capital representing 2.9-3.4 per cent and 2.5-3.0 per cent of their respective market capitalisations.

If adopted, these changes would put further pressure on the sustainable ROE generation of the major banks, thereby reducing the sustainable flow of capital to shareholders in the form of dividends and buy backs.

The Montgomery Funds own shares in National Australia Bank and Westpac. This article was prepared 15 January with the information we have today, and our view may change. It does not constitute formal advice or professional investment advice. If you wish to trade these stocks you should seek financial advice.