The $780 billion headwind for US corporations

The $780 billion headwind for US corporations

U.S. law makers delivered one of the most powerful tailwinds to corporate profitability in many decades by implementing the “Tax Cuts and Jobs Act” (TCJA) which commenced at the start of 2018. While the centrepiece of the legislation was the headline reduction to the statutory tax rate from 35 per cent to 21 per cent, there were several other meaningful changes as well. 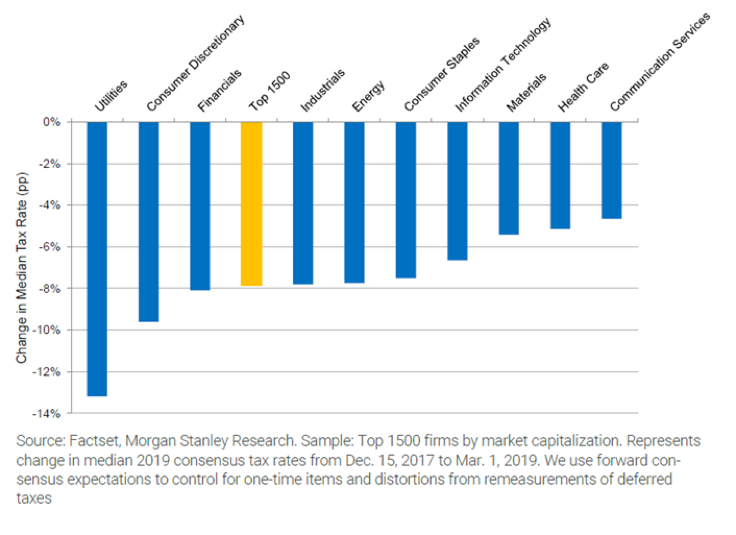 While the impact of the TCJA was overwhelmingly positive for American businesses, key provisions of the legislation are set to change or expire starting in 2021, which may affect decision-making, capital investment and profitability for many companies. On balance, the provisions that are scheduled to sunset will result in effective tax increases for companies. The impact is quite material and estimated to present a $780 billion headwind over 10 years for U.S. corporations relative to the current tax environment. It is worth noting that the reduction in the statutory rate was a permanent change and will not automatically revert and Congress has the power to extend the tax policies before they expire or change as well.

Immediate expensing (also known as bonus depreciation) allows companies to deduct all, or a portion, of eligible capital expenditures / research & development upfront versus having to depreciate / amortise the investment over a predetermined number of years. This is a time value of money incentive designed to accelerate deductions and hence defer income and income taxes. This provision begins to phase out at the end of 2022 and is scheduled to fully expire by 2027. Industries most exposed to this revision include manufacturing, telecommunications and the technology businesses due to the significant capital investment being made within these sectors (have been more favourably impacted by the policy).

Companies will also see a significant change in their ability to deduct interest once the limit moves from 30 per cent of EBITDA to 30 per cent of EBIT at the start of 2022. Capping the interest expense deduction as a percentage of EBIT (as opposed to EBITDA) will increase cash burn for more levered businesses and may also dis-incentivise marginal capex decisions as well (capex spending lowers EBIT as D&A increases). In fact, it is estimated that U.S. corporations will lose $27 billion in interest deductions per year based on current balance sheets, interest rates and earnings. Healthcare (pharma / large hospitals) is expected to be the most impacted sector followed by Communication Services (media) and Energy (Exploration & Production) making up the top three. 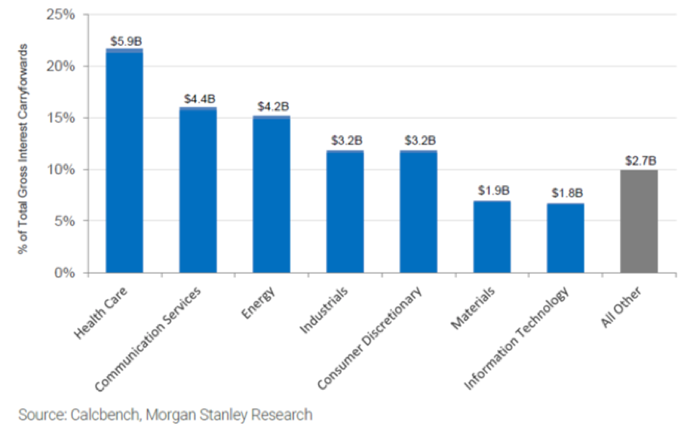 The Marginal Effective Tax Rate (METR) captures the effect of phasing out immediate expensing of capex / R&D and further restricting interest deductibility, and has been modelled by Morgan Stanley for new investments from 2017 to 2027. The METR reflects capital structure (leverage), time value of income and deductions (bonus depreciation) and therefore may be a better indicator of tax impact on new investments versus the statutory rate itself. We can see from the chart below, the marginal rate on new investment dropped to 4.4 per cent from 8.1 per cent post TCJA, however, scheduled changes will see the rate approach pre-TCJA levels by 2023 and then nearly quadruples today’s rate by 2027 if Congress does not extend the policies. This would likely present a substantial headwind for companies and their profitable growth ambitions. 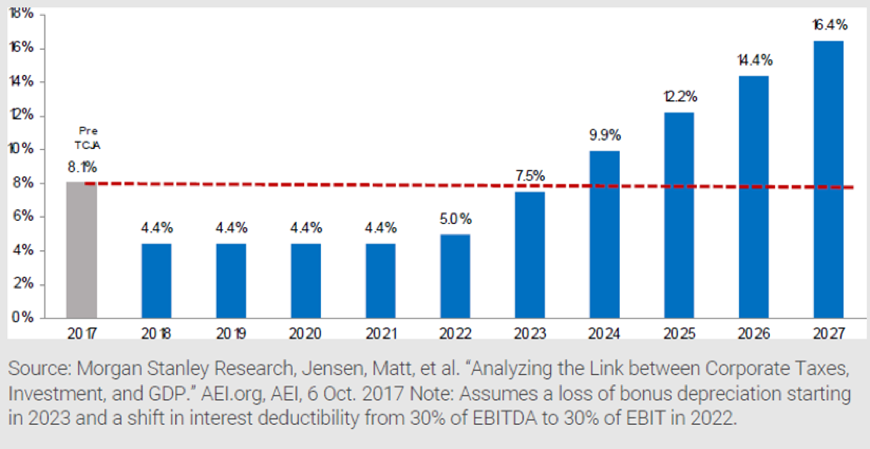 The expiration of tax provisions under the TCJA is a longer-term theme and not necessarily front of mind for the market today, but we think the implications are important to consider and be mindful of going forward, as the impact of the TCJA may be less supportive for both economic and earnings growth than what we have seen so far.

You are reading an article about: Companies, Global markets