After delaying the reporting of its full-year results multiple times, initially scheduled for 18 July, Sports Direct (LSE: SPD LN), finally reported its results on Friday July 26, after the market closed. The beleaguered retailer, which the Montaka global funds have been short, presented a set of results which showed additional red flags, and a situation that has clearly deteriorated since we last wrote about the business.

Sports Direct, as a brick-and-mortar sports apparel retailer, is contending with secular pressures facing the industry. Mike Ashley, the Sports Direct CEO, did not hold back in his remarks about the difficulties the company is facing: “The current bricks and mortar retail market is in dire straits and without substantial support from the Government in particular it is in a terminal state.” It is perhaps unsurprising that Sports Direct is now having to deal with the departures of a number of high profile executives.

It was announced alongside the full-year result that the Sports Direct CFO, Jon Kempster, was resigning. It was also previously announced that Karen Byers, the global head of retail at Sports Direct, was leaving. Mike Ashley once commented that “Karen Byers runs Sports Direct…She is the person who sets the rules. Not me.” These numerous and sudden departures in the upper ranks presage the mounting issues at the company, and in our view are clear red flags.

One such problem is the House of Fraser (HoF) business, which Sports Direct acquired in August 2018. We were highly sceptical of the ability of Sports Direct to make a success of the HoF business, which was bought out of administration. In the latest earnings result Ashley so much as admitted the purchase was a mistake: “if we had the gift of hindsight we might have made a different decision in August 2018.”

Ashley then offered further comments that underscore the difficulties faced by HoF. “However, as we have continued to look under the bonnet as we integrate the business, we have found that the problems are nothing short of terminal in nature. Serious under investment in stores and appropriate support services, excessive and unsustainable outsourcing and financing, and selling brands to their Chinese parent shortly before administration are just some of the many problems faced.” Rather than purchasing a business that will be accretive to Sports Direct’s earnings over time, we believe that there is now a heightened chance that HoF will continue to be a drag on earnings for a sustained period, and could be NPV negative in its entirety.

The results also shed light on the strained relationship between Sports Direct and its third party brands, with the Ashley noting the dissatisfaction brands had with Sports Direct’s traditional discount model of “stack them high sell them low.” He went so far as to note the increased risk of Sports Direct being cut off completely by these crucial suppliers, in our view a highly negative asymmetric downside risk faced by the company.

Lastly, but no doubt a concern for the viability of the business, was the disclosure at the very end of the full-year results report around contingent liabilities. It was disclosed that Sports Direct had been the subject of a tax audit in Belgium, and on 25 July 2019, the company had received a payment notice in the amount of EUR 674 million from the Belgian tax authorities. While the company will no doubt contest this and will enter a fiscal mediation to attempt to resolve the issue, it is worth noting that the EUR 674m sum as it stands today equates to over half of Sports Direct’s market capitalisation.

The Sports Direct business continues to deteriorate, and we are pleased by the returns generated by this short for our investors. We continue to work to uncover similar opportunities of pressured businesses that we can profit from on the short side. 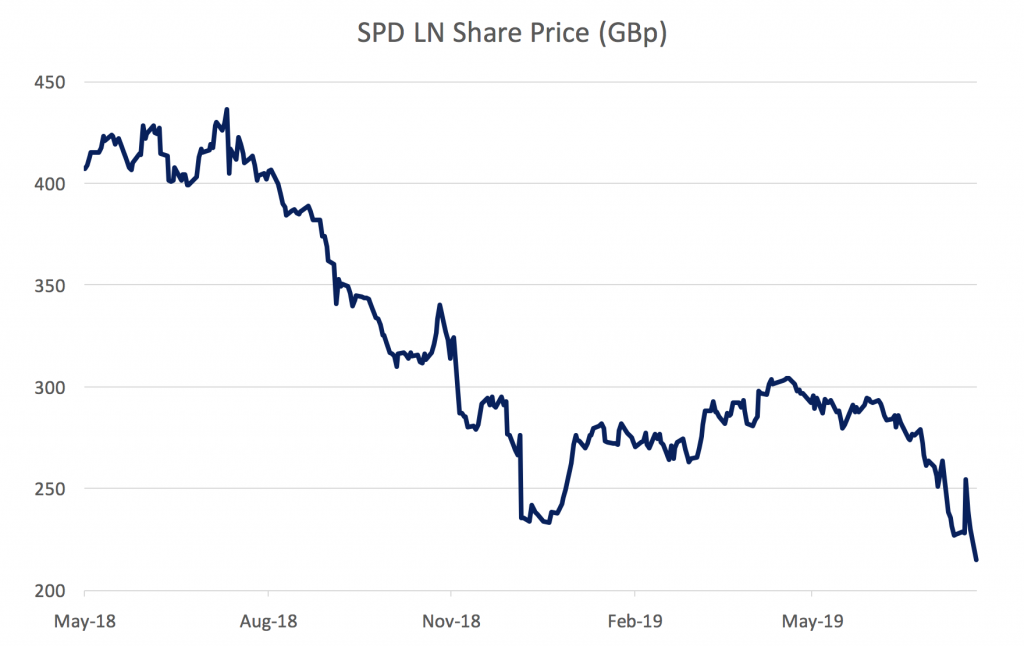 The Montaka Funds are short shares in Sports Direct. This article was prepared 30 July with the information we have today, and our view may change. It does not constitute formal advice or professional investment advice. If you wish to trade Sports Direct Group you should seek financial advice.