Power to the US Consumer

Power to the US Consumer

Amidst the backdrop of a ten-year economic expansion, recent indicators of a softening in US consumer spending do not feel unreasonable. However, when breaking down the fundamentals of the US consumer, whose spending drives the aggregate economy, they appear as strong as ever.

GDP is aggregate economic demand, defined as the total value of everything produced in the economy. GDP is the sum of consumption, investment, government spending and net exports. The US maintains a trade deficit (negative net exports), leaving consumption to drive about 70 per cent of the GDP equation. As such, the US consumer is the primary indicator of the strength of the overall economy.

Spending has grown significantly since the Global Financial Crisis. In the past decade spending has risen by around US$4.4 trillion, including over US$600 billion in 2018. Annualised Q4 consumption was US$14.2 trillion, just under 70 per cent of the US$20.9 trillion US GDP. Moreover, consumer confidence is robust and unemployment remains near a fifty-year low at 3.8 per cent. Conflicting data points such as Christmas holiday spend rising at below the ten-year average are isolated amid a sea of healthy consumption validation.

Spending on services is inherently less volatile than on goods. Consumers will switch to cheaper groceries or miss out on the new iPhone before they consider cutting their banking or healthcare services. The US has undergone a secular change from goods to services expenditure, where services now account for almost 70 per cent of all personal consumption, and therefore almost 50 per cent of US GDP.

The rise of services spending is met by a rise in the output of the service sector. Moreover, this drives employment in the service sector relative to goods, and hence it has grown steadily to now command over 85 per cent of US nonfarm payrolls employment. Naturally, employment in services is less volatile than in the goods sector, since it moves in direct proportion to output and consumer spending. This is most clear in extreme circumstances such as recessions; for instance, peak to trough change in US employment during 2007-09 was an over 22 per cent decline for goods jobs, compared to a less than 4 per cent fall in services.

Strength in the services sector translates into lower volatility of overall consumption. Hence, with consumption and the share of services rising significantly in the recent decade, the probability of future consumer spending and employment stability has likewise grown materially.

Furthermore, real wage growth fundamentally controls consumer spending power. Against the perception that households have been under income pressure in recent years, real wage growth has in fact been relatively strong. Macquarie’s calculation of the 5-year cumulative real average hourly earnings growth has been trending upwards since 2014, accelerating to 6.9% in December 2018. This translates to 0.7 per cent per year compounded annual growth over the past ten years, in line with longer-term averages. 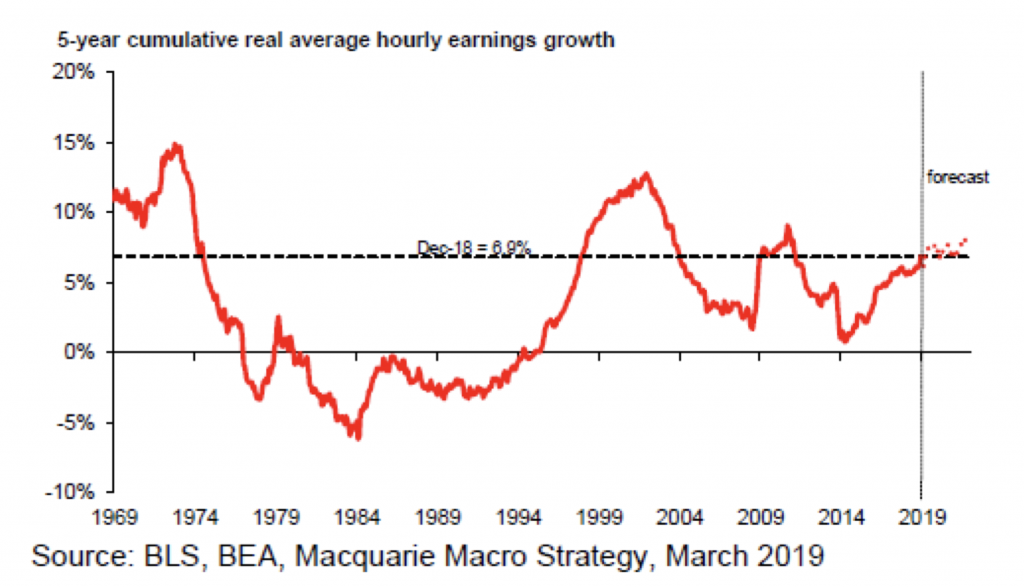 In addition, wages have increased around 75 per cent over the recent 20 years, whereas prices have only risen 44 per cent. By contrast, in the 20 years before that prices rose 215 per cent, in line with average hourly wages’ rise of 216 per cent.

Breaking out real wage growth further, we find that the lowest wage earners have had the greatest relative hourly income boost. The lowest earning quartile is near 5 per cent year-over-year wage growth, while the second and third quartiles are more than 3 per cent. Coupled with record low unemployment, it is clear the engine room of the economy is especially robust.

As such, household income has received a significant boost in conjunction with wage growth, steadily accelerating to form the best five-year period in recent decades. Real median household income was estimated by Sentier Research to have reached US$63,517 in December 2018, up by close to 15 per cent from 2013. 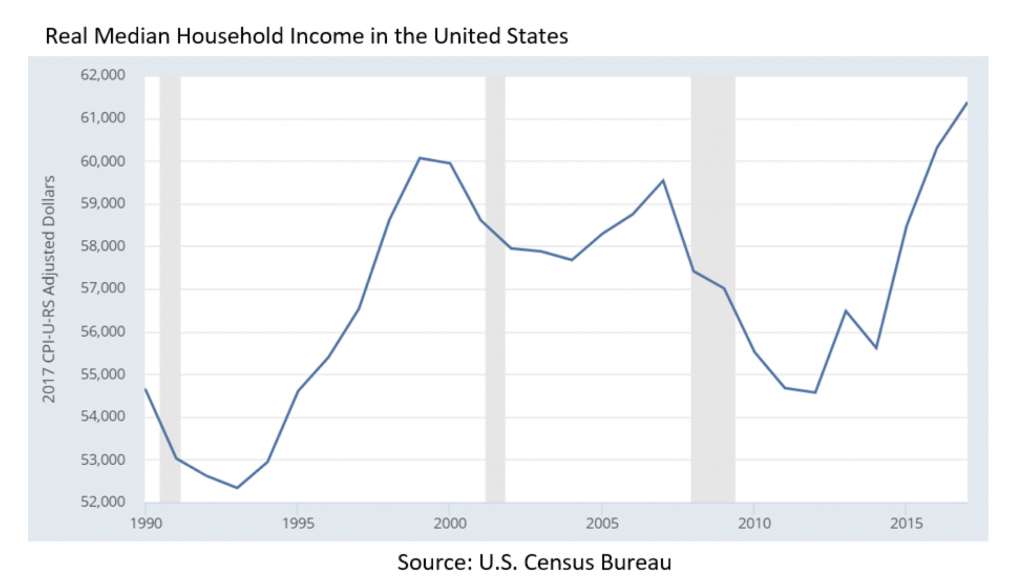 In addition, while real income has progressed to historic highs, household debt service has reached its lowest level in recorded history. Debt service payments fell to 9.8 per cent of household income in Q3 2018, down from a high of over 13 per cent in 2007. In combination with low petrol and other energy prices, today’s consumer not only has a higher income than yesterday’s, but has a larger proportion of it available for discretionary spending.

Finally, the stability of the US economy is further assured by the ageing population. As an increasing number of people move into retirement, less new jobs need to be created to keep unemployment at its healthy low rate. Moreover, with a greater share of the population no longer tied to employment, their spending should be unchanged in the event of an economic downturn.

Evidently the US consumer is well positioned to handle any deterioration in the economy. However, after breaking down the fundamentals of consumption, it is hard to believe that the US economy will be materially slowing any time soon, as the powerful consumer continues to drive growth in aggregate demand.