Much has been written about Kraft Heinz (NASDAQ: KHC): a business which names Warren Buffett’s Berkshire Hathaway as its largest shareholder and one with a stock price that has declined by around 70 percent over the last two years.

But the recent New York Times piece on the business is worth a read as much for its analysis as it is for its prose. The Times neatly introduces the current situation in which Kraft Heinz finds itself as follows: “The company behind brands like a famous ketchup and Oscar Mayer meats is dealing with slumping sales, shareholder lawsuits, layoffs and questions about its accounting practices.”

The aspect of the analysis that we believe is worth highlighting relates to Kraft Heinz’s industry leading profit margins. As you will see, high profit margins are not necessarily a leading indicator for success.

In acquiring its stake in Kraft Heinz, Berkshire Hathaway partnered with 3G Capital, a Brazilian-based investment firm, known for its capabilities in large-scale cost-reductions. Here is how the Times describes 3G’s approach to cost-cutting at Kraft Heinz:

“Managers and employees inside Kraft said they had spent long hours and weekends after the deal closed gathering data on everything from expected travel expenses to estimates of how many paper copies their departments would make that year. Those figures were stuffed into voluminous spreadsheets and given to 3G.

That became the foundation for 3G’s cost cutting. Travel for some departments was cut in half. There were no more color printouts of presentations. Office snacks — like the free Kraft cheese and Planters nuts that employees could grab between meetings — were eliminated.

The biggest cuts came in staffing. In August 2015, about a month after the deal closed, Kraft Heinz laid off 2,500 employees, roughly 5 percent of its global work force. That included around 700 people, or about a third of the staff, at Kraft’s headquarters in Northfield, Ill. In November, Kraft Heinz announced plans to shut down seven plants in the United States and Canada, cutting 2,600 more jobs.

From London to Chicago, important responsibilities once divided among multiple employees, like market analysis and negotiations with supermarkets, fell to a single individual or a small group. With each round of layoffs, those who remained became increasingly dispirited, according to former employees…” 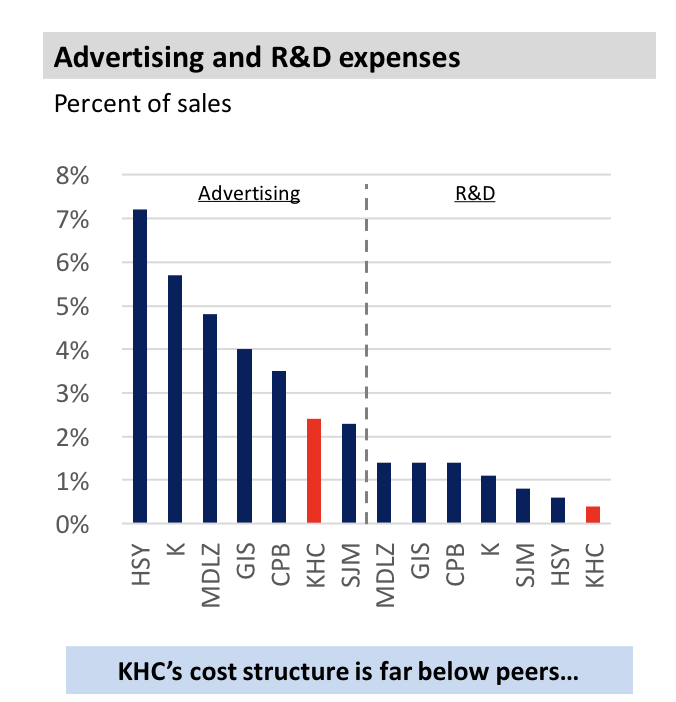 Here’s the problem, however. Cutting excess or non-productive costs is always sensible for a business in seeking to maximise profits. But cutting productive costs or investments; and erasing long historical organisational experience is nonsensical. Yes, it boosts short-term profits – but does so at the expense of long-term profits. We believe Kraft Heinz will go down in history as a classic case in this point.

The Montaka Funds are short Kraft Heinz. This post was prepared 25 September with the information we have today, and our view may change. It does not constitute formal advice or professional investment advice. If you wish to trade Kraft Heinz you should seek financial advice.